Pancake with Apple and cinnamon garnish Not so long ago, I met with these pancakes as a pancake. You all know that it's a small, delicious pancakes. Today I want to share with You another option of cooking! It is very delicious invite!

Ingredients for Pancake with Apple and cinnamon garnish 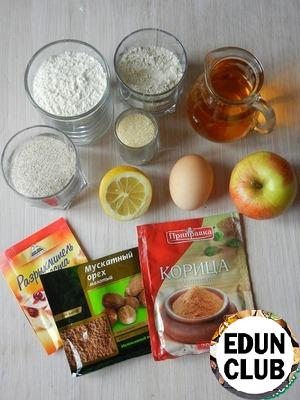 The products that we need Prepare the Apple-cinnamon topping. Apples peeled and seeds and cut into slices. 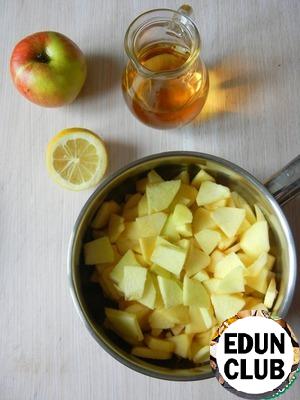 Spread Apple slices in a pan, add Apple and lemon juice and stir.
Put the saucepan on a low heat and cook under cover on medium heat (temperature) about 7 minutes. Then add sugar, fire (temperature) and cook to reduce until the juice thickens and the apples are soft, about 10 minutes (without a lid). At the end add the cinnamon. 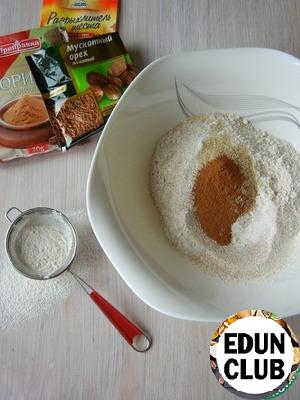 While preparing the side dish we will prepare the dough for our pancakes. In a bowl sift the three kinds of flour and baking powder, then add the sugar, cinnamon, nutmeg and salt. Mix everything. In the centre we do deepening and add the egg and Apple juice, then add the melted butter. Mix well. The finished dough should be as sour cream. The pan is well heated and slightly greased with vegetable oil. A tablespoon pour the dough and fry the pancakes on each side until Golden color. Pancake cake "Creamy"
179 - - -
Suggest you try a classic dish - pancakes with sour cream, decorated cake. Delicate, airy, porous pancakes with a touch of tartness from the plum jam and creamy sour cream! This is my first experience making yeast pancakes, very good in my opinion. Pancakes with smoked salmon
159 - 40м 4
On Shrove Tuesday pancakes are any good. Smoked salmon is also a great option.

Savory pancakes made of wheat flour, based on Indian crepes Dosa
153 - 50м -
These pancakes are not added eggs and no baking soda, no baking powder nor yeast, so that lightness, airiness, holes and kruzhavchiki will not. But will be a wonderful aroma, a subtle spiciness and incredible satiety. Pancake strips with bacon
164 - 40м 4
These pancakes are not quite the usual form, but that's not all. Strips of grilled bacon inside make them even and very tasty. Help yourself. Oats, semolina pancakes without flour
391 - - -
Want to share a very simple recipe of pancakes. I'm sure anyone back home he will not leave you indifferent. Pancakes with chicken and tomatoes
205 3 - 10
So I decided to cook pancake dish! A recipe from old magazine "Lisa", long it is cooked! Help yourself! Pancakes on serum with banana filling
177 - - -
Sweet, soft, aromatic, with melting butter... Cook them on Shrove Tuesday or for another reason, they are delicious! Kids these pancakes just love it!
More recipes