I love recipes with a history or with an interesting name... Here, I stumbled on the Internet at this recipe. The preamble was as follows: Stew Bismarck called "Palestine" - rich thick soup prepared with three different types of meat. He is especially fond of German Chancellor Bismarck when he was vacationing in the Bavarian Spa resort bad Kissingen. Thick and hearty, "Palestine" is included in the Golden collection of 100 of the most famous recipes of different countries of the world. In his honour in the German city of Regen for 130 years the festival is held with night skiing boating, a costume parade, a colorful fair and fireworks. Well, do you think I could resist such a recipe. Of course not! Prepared... very tasty and satisfying, but... it seemed to me simple-minded. Began to search... and found. What I found, more on that below. This soup is definitely prepared with three types of meat.
So, wash the meat and cut into cubes. In a large, deep pan (ideally it should be cast iron) to cook meat.
I took quite a big as I thought, ceramic pot, but in the end all the products are barely fit... So, take more, not lose. 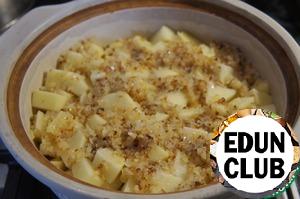 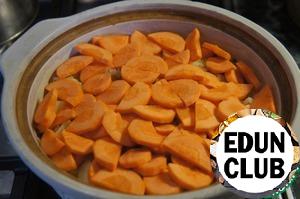 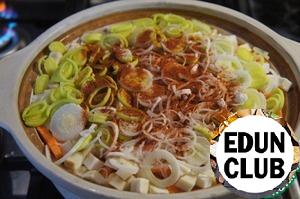 Pour hot water or broth to cover the vegetables by about a finger. Bring to boil and simmer on very low heat for 1.5 hours. Minestrone "Autumn lights"
150 - - -
Generous autumn want to cook vegetable dishes daily. Bright and juicy vegetables are such a delicious, full meal, including lean, they make excellent. As this variant of minestrone. Pumpkin, however, I have pale but with green beans and red tomatoes are quite traffic-light! Chicken soup with sprouted buckwheat
185 - 60м 6
The idea is to cook the soup with sprouted buckwheat appeared spontaneously, when he bought the rump of TM Mistral and found out that it can germinate. Immediately it was concluded: buckwheat natural, without any processing, since it sprouts. I was delighted with the result of your ideas!!! The soup turned out very flavorful and the aroma is not the buckwheat. And, as I know some people don't like buckwheat because of its odor. It is not scored flavor the broth with vegetables! And another plus: the broth is not dark, as is the case when using dark buckwheat. I enthusiastically shared their result with the person who does not eat buckwheat never, in any form. Apparently, I enthusiastically and sincerely shared the impression that he told me: "This soup I would!" I Will buy! ;-) Mushroom soup with dumplings
120 - 25м -
Very quick and easy soup. In the post indispensable thing on a table. Soup "Favorite"
155 - 35м 10
Girl, this soup is the most favorite of our entire family, his recipe is my personal creation. Of different recipes I chose the most favorite ingredients and it turned out that this "favorite" soup! And today I want to share with you this recipe, hope someone will like!:) Apple soup
224 - 25м 3
I want to offer You a light soup, which will come in handy both in summer and grey in autumn days, as a reminder of warm Sunny days. Mushroom soup
304 5 - -
Prepare this soup often! I like the taste of dry mushrooms! The daily soup spicy dumpling
188 - - 4
This is a soup for every day, is prepared easily. Any owner, even a beginner cook it with ease. It will especially appeal to those who loves garlic - its taste and aroma. Try it, you will not regret. Mushroom soup with potatoes "Pai"
143 - 40м 4
A great dish for mushroom lovers. Potatoes "Pai" gives its own flavor, something new and unusual. Come on in, help yourself...
More recipes