Tatar pot pie with potatoes and meat. The pearl of the Tatar cuisine. In every national cuisine dishes that can safely be called a cult. And around these dishes often unfold numerous battles. What happens is these battles often because some people were lucky enough to try this iconic dish in the finest of performance while others do not. What do I mean? Well, for example, in Central Asia it is rice, in Russian cuisine, in my opinion - mushroom soup with sauerkraut. In the Tatar kitchen is, of course, belish. Or should I say Zur-belish. 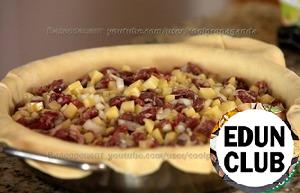 Divide the dough into two parts, roll one part into a sheet thickness of 4-6 mm, to spread in greased pan with margarine. Put the stuffing. Roll out the second sheet of the dough, cover the pie, cut excess. Edge stung. In the center make a hole with a diameter of 4-6 cm From the remnants of dough to make a lid and cover the hole. The remnants of the dough you can also decorate the cake. In the initial phase, approximately the first 30 minutes to bake at 200 degrees (before Browning);

the cake started to brown - cover the bowl or foil and reduce the temperature to 180 degrees;

when the aroma (in about an hour and a half after the start of baking), pour the boiling broth and continue to bake under the foil until ready.

After adding the broth, the cake is cooked for about one and half to two hours.

- the most delicious belish obtained from the goose. The filling for this pie is to add the goose cracklings and pour the goose broth. The batter – goose fat.
My friends! If you are supporters of a healthy diet, it is better not to cook this is definitely a very nutritious dish than to cook, changing the amount of fat component in the dough!

Margarine, frankly, significantly reduces the taste characteristics of the food. Reducing fat and even puts the cake in the category of vague nyamka;

the most delicious belisi that I had a chance to try, was prepared by the masters, who cut the potatoes and onion cubes with sides less than five millimeters, and the meat - pieces of no more than one cubic centimeter. Alas, the bigger the meats, the more it looks like stewed potatoes with meat and the less a masterpiece of Tatar cuisine Raspberry impromptu
230 - 60м 12
The recipe of this cake I think is called "on the go"... there Was a lot of raspberry, I love custard and shortcrust pastry... but what about the almonds... help yourself my dear Cooks! Mini pies with salmon "Sit on the stump, eat pie!"
159 - 60м 10
It's a tiny, juicy and flavorful patties that usually say "by heart" will be a pleasant addition to any picnic. Cake crumbs will bring You great pleasure and fun for the children! Here's a bundle of cakes I did. I put close match and boxes, what would the size of the pies was clear. Tart "Conversation" with almond filling
127 - - 8
Tart "Conversation" (FR. tarte conversation) is a forgotten classic of French cuisine, created in the late 18th century in honor of the publication of the book of Louise Epinay "Conversations Emily," the dialogue between the mother and daughter. This recipe I saw a year ago in a popular French transfer "Best pastry chef" and then in absentia fell in love with this pie story. For a very long time I was motivated to cook, because the recipe is not simple, if we consider that the puff pastry I wanted to prepare myself. The result is very pleased - crunchy glaze, almond filling, fragrant, unusual design. And that would be a crime if I hadn't shared the recipe with the users favorite site cook. ru! Pie "Nevsky"
197 - 180м 30
Somehow I pie "Nevsky" it seems winter pie... Preporuciti powdered sugar - snow. Decorate the top with "pompon" - ski cap! I baked it in a round loaf. It was sold in culinary stores. Similar recipe on the website is, however, the proportions and forming another. The cooking time indicated without taking into account the maturation of the biscuit. The recipe is designed for cooking two pies. Beautiful and delicious winter everyone!!! Yoghurt cake
273 3 - -
Mouth-watering cake which you can eat immediately without hesitation. You can experiment with taste and even color.
More recipes