Dough for pies with a whole wheat crust Just say that the recipe is borrowed on the Internet on the website of Lana Shea, but the Scullion such a test I found. If who will find - tell. Long ago I was looking for a good recipe for a soft yeast dough from whole wheat flour. This dough is suitable for pies, cakes, rolls and bread. The dough is necessary to defend in the refrigerator for 12 hours, and preferably 24. But I usually mix it, for example, on Wednesday night and bake on Saturday morning. That is, it costs me a little more than two days. Freeze it I have not tried it, but I think it is possible. In addition, this dough is suitable for pizza, but then you have to knead the cooler to roll out a thin flat cake for pizza. From this number the test it turns out for 11 large pies (100 g of dough each). You can make the patties smaller, 50 gram test. The dough is almost always I have in the fridge it can be kept for up to 5 days. I just separated from him the number that I need and bake rolls, cakes, etc.

for Easterfor 8th of March

Ingredients for Dough for pies with a whole wheat crust 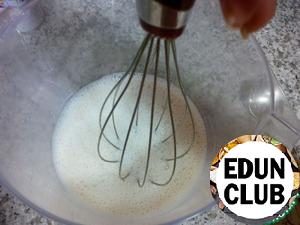 Mix yeast and sugar with warm milk and let stand for 5 minutes so yeast is activated. Then mix thoroughly with the milk to the yeast and the sugar is completely dissolved in milk. Add milk to the yogurt Add sifted flour and mix everything carefully, it is very important to avoid lumps, creamy mass is obtained, 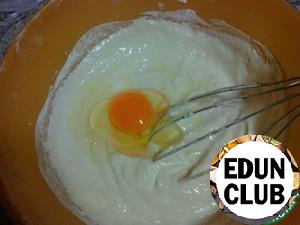 Enter in well diluted mass of the egg and again mix everything carefully. Next, enter the whole wheat flour, salt to taste and 10 grams ol. oil. All mix thoroughly, the dough will be semi-soft and even sticky. Do not hammer flour! Put the dough in the fridge, covering the bowl with cling film. Take out the dough after 12-24 hours. Prepare the filling. In a processor or grinder, or grind manually the breast, carrots, onions, herbs and garlic. Stir. Fry until cooked in a pan for about 10 minutes. Make sure that the breast is not dry 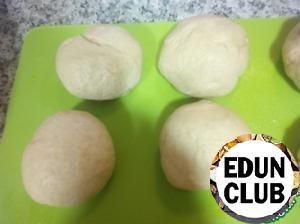 Divide the dough into the number of parts as we want to make pies. I take a gram balls for 60-70 not very large cakes. You can do less or more. Cover with a towel, so as not zavetrilos. With this quantity of dough and 30-40 g of the filling in the pie turns out about 170 kcal. Make the pies. The dough is very soft and pliable. The seams do not diverge and cakes to sculpt very easily. Put seam side down on a floured or covered with paper baking sheet. Cover with a towel for 30 minutes cakes are ready to go. After 10-15 minutes turn on the oven and heated it to 200 g. 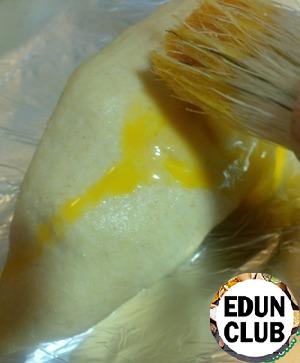 Before baking grease the cakes with yolk beaten with milk. You can also bake them on baking paper. 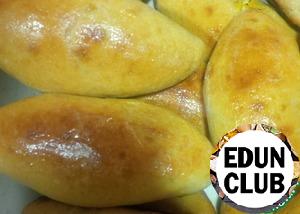 We put on 30-40 minutes in a 200C oven until Golden brown. Take out and drain grease from the top. oil. Cover with a towel and leave to cool. The patties on the cut. The dough is very soft and airy, and the filling is juicy You can also make buns with sesame seeds. Dazzle of dough balls, dipped in sesame seeds, slightly pressing it in, and bake at 220S 20 15 min until Golden brown. These I baked in the convection oven. Good for sandwiches, burgers and in General instead of bread. Available only to registered jellied pie with plums
81 - - -
Wanted to tea muffins, fragrant air, and to mess with the test laziness-laziness... Well, there is bread, where am I without her? My assistant. And with the recipe I decided immediately, thanks to Pillsbury Omela from the website "bread. PY", and was not disappointed. Pie with salmon and spinach
64 - 60м 8
The pie is insanely delicious, simple to prepare. What flavor, and appearance and taste..! Twice a week I took him to bake to order home :) Good as with this fish, and with any to your taste, or even with chicken. Pie "coastal autumn"
68 - 300м 6
Coastal autumn - week wonders, Crimson-yellow of the hills and the forest. Huge cones fall from the cedar, Lemongrass, raisins, so that bursting of the bucket. The sun in summer shines in the window, Sleeping, resimleri, happy cat, Fresh-eating chum or pink salmon. The air itself fills the whole soul. Sea breeze whipping wave, Magical time, like a dream! Yeah, fall we have a wonderful time. And your pie I made with our "exotic" berry - raisins. Soft cake with ricotta and cherries
77 - 60м 8
In Italy are often added to the dough, ricotta, tons of it gives it a subtle texture. To cook these cakes can not only cherries, but also apricots, peaches, cherries. Each time a new taste. Torta morbida con ricotta e ciliegie - soft cake with ricotta and cherries can be served both warm and cold. The recipe is from the book Ella Martino "the Secrets of Italian mom" Pie "hare's hut"
67 - - -
To a new, very interesting, the competition was prepared by the whole family, the preparation took more than one day. Son chose the tale, and the fun began... Mom tied the Bunny and the Fox, the Pope made houses (not without the help of my son). And then baked a cake... all together! Butter, homemade cake for the Bunny, with a three-layer filling of cabbage, carrots and eggs. What we've got - we are glad to show You! Welcome to the TALE!!! Pie with canned cherries
111 - 30м 8
If You have some free time, you can always please yourself and your relatives with something tasty. This video recipe pie cherry will not take You much time to prepare. It turns out he is tender and very tasty. Bon appetit to You!
More recipes