Described the recipe for the pork of shpikachki in a natural casing. Sausages is the same as sausage, only with whole pieces of bacon. Soft, tender, fatty pork perfectly good and boiled, but especially delicious when roasted on the coals. For the production of shpikachki I took 1500 g good pork flank steak - meat, with a minimum layer of fat. The skin cut. Meat cut in small pieces, easy to scroll in a meat grinder. Added salt - cook and nitrite (total 30 g). Cook meat and sent to the days in the refrigerator. Meats can stand in the refrigerator for a day or two, if there is no time to make sausages immediately. 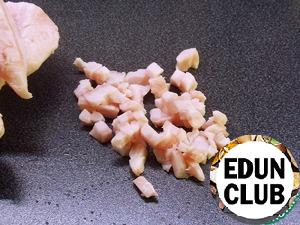 Fat taken from the back - it is firmer. Froze in the freezer. Half the fat cut into large chunks - they will go into the grinder. The second half cut small cubes for the stuffing. 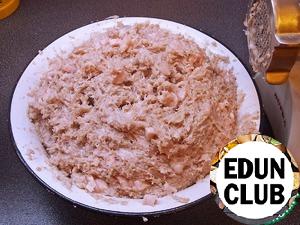 Took the meat out of the fridge and pulled off together with the fat through a meat grinder with a lattice with holes of diameter 3 mm. Then cranked again. Then, the third time, pulled the meat through the grate with holes 2 mm in diameter. Added spices - pepper, garlic, nutmeg and sugar. Good fluff stuffing up to the formation of the emulsion (reaches for a spoon, forming white threads). Then, continuing to whisk the minced meat, added in small portions ice water. In the thus obtained homogenized beef added pork fat (small cubes) and completely messed it up. Then, using a special nozzle for grinder filled it with minced pork cheruvu (intestine). The ends of the sheath tied off with string. Shaped bars with a length of about 10 cm Removed the sausages in the fridge. 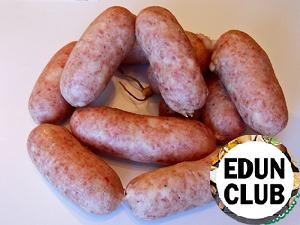 A day later laid out the sausages on the grill of the oven and slowly (over 3 hours) warmed to a temperature of 70 ° C. the internal Temperature of the sausages was measured with a special probe thermometer. After this it remains only to cool the sausages and put into the refrigerator, to find a suitable recipe and gather loved ones for a notable treat. 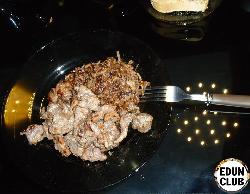 Pork tenderloin with fried onions
84 - 30м 2
This dish is "invented" my husband, because is very fond of fried onions from the skewers. Frankly, were skeptical (on the fire one, and the pan and butter it is not known that). But, when tried, was very happy. I hope You will like it as me! 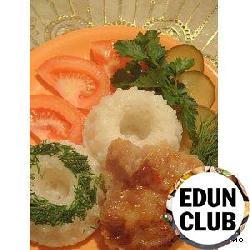 Pork medallions with rice
167 - 120м 4
We love chops. Prepare them in different ways. This is one of the most successful. My home like a supply of rice on the side. Kebab "Blizzard"
77 4 40м 8
Today is so cold outside, a snowstorm, with the wind of the Volga - don't look up! And I so wanted kebabs with lemon in the summer... Guess who went to the market for meat??? Meat in French
120 - 30м 5
In no case do not claim the original recipe. You can even call just "Meat under a fur coat". In General, to your judgment and taste. Just warning you, meat diet it turns out not. A good blow to the liver, so to speak... Pork Siberian
97 - 80м 5
This pork can be prepared on weekdays and holidays. Bright, juicy, flavorful! Bigus with apples and lingonberry jam
81 - - -
Bigus (Bigos) - a traditional dish of Polish cuisine. Also, it is typical for Ukraine, Belarus and Lithuania. But in the era of globalization it is an excellent dish and migrated to Russia and enjoys well-deserved popularity here. Options Bigus great variety - and the knuckle, and with bacon and smoked ribs. In Bigus and add the prunes, and raisins, and plum jam. My version with apples and lingonberry jam and a drop of the favorite soy sauce!