I felt like a cave woman. The one who sat in the cave waiting for them cavemen would just kill the mammoth and dragged to the cave. ))) My husband the other day, returning from work brought home smoked mammoth bone! ))) Just kidding of course. Just my husband goes to work every morning past the smokehouse, there's always that smell that don't stop just. Here he stopped and bought a smoked bone. But it wasn't ribs - and some straight pieces of spine which had little meat but the smell was just amazing - just out of the smokehouse! And asked my producer to dinner-bag. But I have no lemon, no capers - and without them what is Solyanka? In General, it was necessary to invent - will talk during the prescription. But she's wrong - because this is not how I usually cook it. But this unusual happened to that delicious - now I have two "my" recipe soups And the most amazing grab bag turned out light - as these bones had no fat and the meat was a little (starving the mammoth looks like)))

Ingredients for Hodgepodge of "mammoth" wrong

Step by step instruction of cooking Hodgepodge of "mammoth" wrong 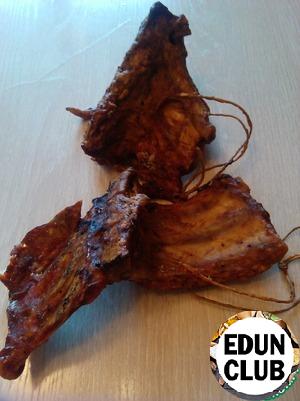 Here are the bones of a mammoth, I dragged my provider.
The other one weighed 430g 650g.
I took the smaller one on the soup 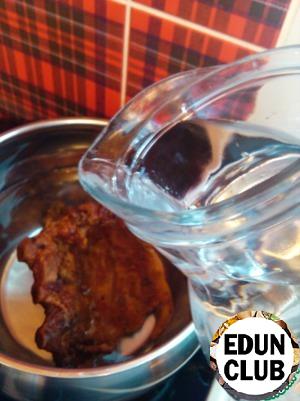 Usually I cook a bag of beef brisket (uncooked), and then add in soup, different meats.
And then it turns out the opposite - taking smoked bones, fill it with water and put to boil the broth 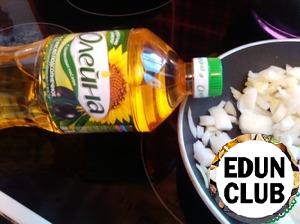 Usually add tomato paste to peretarka, but it turned out that it remained "on bottom" and soup is not enough - so went in the course of homemade tomato sauce ( in its absence I think it is possible to take Krasnodar sauce is sold in stores).
Add the cheese and lightly deep fried with onions.


At this point, I realized that usually, before putting the tomatoes in the pan, I add cucumbers and stir-fry them with onions - but then I just forgot!

So quickly in another pan drip a drop of oil, "they" cut the cucumbers and fry them, but now separately All this time I thought - what can replace the capers and lemon???
I freeze for the winter garlic arrows - here I decided to put instead of capers.

With lemon, nothing is clear...

So the broth is ready zazharku ready, assemble the soup, put the soup in the potatoes and cook for 10 minutes Now add to the pot our fries, pickles and garlic arrows, cook for another 10 minutes And then came the idea - after all, our ancestors in Russia definitely lemons-not every day seen - and how they cooked a hodgepodge without lemons - sour well-they have been??? - The APPLE! Well, of course!

I rubbed grated Apple and sliced olives with black olives (these, fortunately, the house was) - put in a pan, let boil and switch off. We leave under cover the soup for 15 minutes, leave to steep 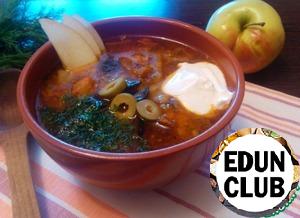 Serve, sprinkled with herbs, with sour cream - but instead of a slice of lemon in my bowl slices of apples.

And believe me, with apples hodgepodge not worse! The main thing is to take the apples sour! Solyanka vegetable
80 - - -
Solyanka with four kinds of mushrooms: dried, fresh, salted and pickled. Very worthy of the bag! Despite the absence of potatoes, it's still satisfying as well sooo mushroom))) Ginger Hodgepodge
89 - 60м 10
Each family has its own nuances of cooking this dish, and I would like to show you my. This dish is for those who love spicy tinge of taste in their food. Solyanka
95 3.5 - 4
The program is designed to prepare a typical filling soups like Solyanka, shchi, rassolnik. Hodgepodge home for chicken hearts
98 - 120м -
A bag of my husband and ready to eat several times a day. Use it to the best quality, fresh and organic food, and not something lying around in the fridge. Only forest mushrooms, own harvesting and roasting, are worth! My friend, Natasha, every time I make a bag, be sure to come to try it, and says that it tastes better not eat anything. And I agree with her! Solyanka chicken broth with mushrooms
92 - 60м 36
Solyanka, one of the great soups of Russian cuisine can be cooked dozens of different ways, with different sets of ingredients. However, all of these options combines fragrant sour taste with a hint of tomato and lightly smoked taste. I offer you a recipe soups with mushrooms, Portobello and shiitake mushrooms - not very traditional. This recipe on this website I found and so decided to share. This recipe was created based on the transfer of Ilya Lazerson "Principles of cooking sour soup". Orignially combination of ingredients has been expanded and some of the techniques changed. This soup is not ashamed to put on the table for guests and the leftovers reheated the next morning to improve your health :). This sour taste is very beneficial for digestion. The number of products in the prescription is written on a large pan (9 liters), as it is prepared for two families for a week.