Pies "Rosanchiki" with beans and mushrooms Unusual pies turned out very tasty stuffing! Very pleased with the interesting and waste-free method of forming open pies. I recommend to try!

Ingredients for Pies "Rosanchiki" with beans and mushrooms I cook beans with a regular pressure cooker without pre-soaking. For this Cup of beans (Kidney, HM "Mistral") to fall asleep in a saucepan, pour three cups of boiling water, add tablespoon of vegetable oil, to avoid excess foam and clogging the valve of the pressure cooker. Do not add salt! Cook for about an hour. The finished beans to blend it with a blender together with the rest with the cooking liquid. Makes approximately 600 g ready-made bean puree. For pies you will need half. From unused puree can be stored in the freezer. 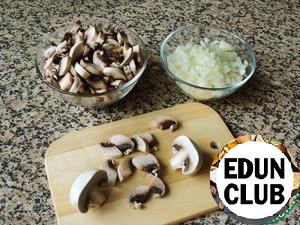 For the filling, chop the onion, slice the mushrooms not too large. Mushrooms saute in the pan under the cover until evaporation juice. Lay out and fry in the same pan the onions until it will turn brown. Combine all together and fry for another 5 minutes. 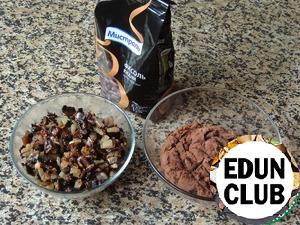 Bean puree and sauteed mushrooms to mix. The filling turns out very plastic, does not leak and does not crumble. 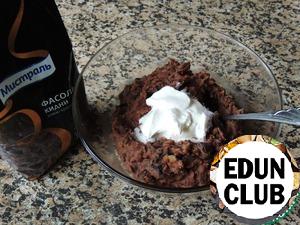 Season with salt and pepper. To soften the structure and flavour of the stuffing mix in a spoonful of sour cream. 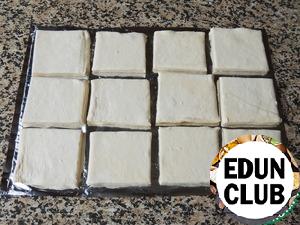 Until you prepare the stuffing, thaw the dough, spread it on a sliced package. Plate divided into 6 parts. Each rectangle of dough to roll out to a square, to make cuts at the corners. Put on the middle 1 tablespoon of the filling. To connect two opposite "petal", as if hugging the stuffing. Then fasten the remaining two "petal". Cakes to pass on the laid parchment baking sheet, podrachivaya attachment "petals" under the bottom. Grease pies egg and bake for 15-20 minutes at 180 degrees. Suggest 5-7 minutes, when the dough rises, get the pies and grease again the remnants of the eggs. Out very crisp and tasty "rosanchiki". The dough you can use any one you love in your family. When submitting in the center of each pie sprinkle a little green onion. Twist with cabbage and rice
74 - 60м 8
Braid with rice and cabbage, cooked with soul and great mood for the loved ones and family, create incredible harmony at the family tea party! And the aroma of freshly baked pie of the household will gather for yourself! Express cake of bread
84 4 60м -
At the request of your favorite chefs happy to give the recipe that can be made from ordinary white bread. The recipe is very simple, the filling can be any. Quick, tasty and very satisfying! And for those who are not very "friendly" with the dough - simply a lifesaver! Try it! Cake "Good morning"
94 - 40м -
Delicious, quick to prepare cake. A wonderful start to the day!! In General, the cheese-curd cakes, in my opinion, always win-win! And for kids and for adults! The same pie just a storehouse - no flour, butter and sugar! Everything is just wholesome, healthy and very very tasty!!! Plum cake
97 - 90м 12
This cake I want to give kind, sensitive and sympathetic person - Ninochka (barska). Nina, thank you for your support and good mood that you give to others. I hope you like it.... Cake with figs
58 - 25м 6
A long time had a desire to bake a cake with figs. Thought, wondering what dough to use? A good idea came shortcrust pastry, but I at the last moment, still bent to his beloved, yeast dough. The number of components and the cooking time test was changed and I got something average. Form also decided not to repeat. We wanted to make a leaf shape, but it turned out almost fruitless Fig tree)) in General, the experiments continue)) help yourself! Yes, I'd like to say that 3 recipe my cakes have been removed since the photo was a link to my blog, but I decided to introduce You with another cute and tasty pie, maybe someone will have the recipe to taste)) Chocolate cake on the ricotta
93 - 40м 8
You know the scenario... a friend Called and said come in for a Cup of tea/coffee! And You have a home and there is nothing..."sweet"! In this case, it will rescue You here like this "Express-prescription" cake! Minimum effort - maximum results! For its preparation you will need one bowl for mixing all ingredients and whisk... (even kitchen scales and a baking dish!) Butter "Grandma" with chocolate and marzipan
83 - - -
I LOVE chocolate, especially bitter, with a dizzying cocoa aroma. Today I have a sweet yeast cake, with a layered filling of chocolate protein cream, marzipan and spicy cinnamon. A soft and airy crumb with a thin crispy crust covered with a thick layer of dark chocolate. This dessert is the perfect complement to aromatic Cup of coffee.
More recipes