Very simple, but very tasty and hearty dish. The preparatory process is short, and the result is stunning!!!

Ingredients for Pork ribs with potatoes

Step by step instruction of cooking Pork ribs with potatoes In a bowl, mix soy sauce, vegetable oil and honey 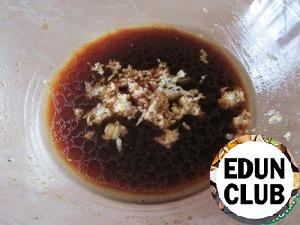 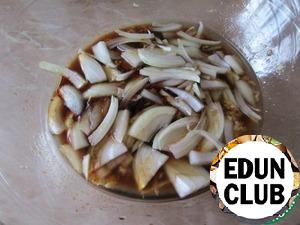 Onions cut into quarter-rings, add to the mixture Add the ribs and mix thoroughly, set aside for 30 minutes 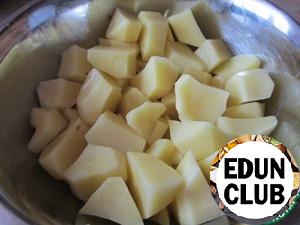 After half an hour, peel, wash and cut in large dice 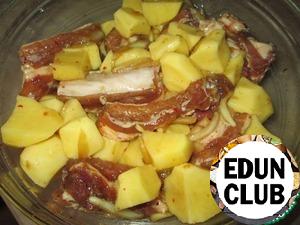 Spread to the edges and stir. Leave for another 30 minutes 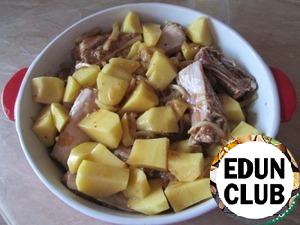 Spread in a baking dish and send in a preheated 200 degree oven for 1 hour 30min. It can be a little less. I always check the readiness of potatoes. Try a piece, if the potatoes are ready, and the appearance causes strong salivation - take out! Pork with sweet and sour peppers
148 - - 1
Very simple, quick and tasty. Recipe from the series for my husband. Simply roasted meat. Pork in mustard and beer marinade
153 - 180м 6
Really like this marinade, the meat is soft, you can take for barbecue. Meat "sated, drunk" - but! with the perfume!
427 - - -
Love our, er, how to put it exactly, well, "scoop" the kitchen, when all lumped together... I mean kitchen for all peoples, then still living in "that" country! Love! And not very much doing in the panties from delight, "Oh, pizza!"-"Ah, pasta!"-"Oh, sushi!"... Well, not that don't love and don't eat - like (ahem!) and eat (sometimes!), but as expressed by my husband: "seven years of harvest on the Mac was not - and hunger identity was not!" But on the other hand, I have to admit, very interested in all sorts of unusual recipes, all the time looking for new, try... I don't care what they the kitchen are: whether it's French, Hawaiian or Belarusian (I, for one, tasty and interesting recipe birds are not found, than Belarus, "native folk", so to speak)... in short, if delicious, then what's the problem? Cook and eat! Long ago, I was thinking to cook something with the use of AROMATIC OILS, and even books purchased oil! Recipes peruse... Long thought... I Decided... However, have adopted only the idea of using those oils! - and the recipe itself, according to the scheme: pickle meat (I like meat and fish with the marinades), and then further heat treatment with all kinds of decorations! Well, show off number 1 is oil. A few words about them: for cooking, suitable only for 100 % natural oils and no other! There are many, but "use" their drops! You should always pay attention to it, not to mix in any time with those oils that are intended for flavoring premises and other things. Show off the room 2 - is already in the kitchen for the 2nd week of vodka, the husband says, "use it! for cooking", not the taste he came, you see! That's before "happy" zhiss was: got "Moscow" - and schastliv! The other was not! Or no, more like "Capital" was? And now the sea! A good choice makes life difficult, as it turned out. Well, a long time did not know how to use, and then think, "what if we make a meat-drunk"... And I did, very well turned out - delicious and flavorful!

Snack Lady
165 4 - -
Found this recipe on one of the sites, prepared for the birthday of her husband, we all liked it, and I didn't get. Pork with potato cones
165 - 90м 4
Dear cooks, I suggest you to cook a wonderful dish for Sunday dinner. Baked tender meat, flavorful, delicious sauce and a garnish of small potato "bumps" instead of the usual mashed potatoes. Pets will appreciate your culinary talents when you put them in front of the dish so yummy! Welcome to the table!