Ingredients for Soup with beans

Step by step instruction of cooking Soup with beans Overnight to soak the beans, I took red. Before cooking rinse and then boil for 40 mins -1 hour, I cooked it for 40 minutes. To fire put a pot of water, I took the 3l pan on, and filled it with water half. Potatoes cut into cubes and throw into boiling water. 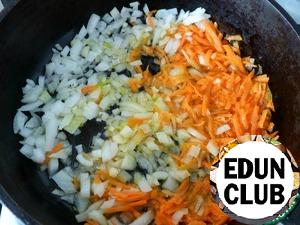 Zazharku add the tomato (I took the Krasnodar sauce), or tomatoes. Potatoes boiled – put the beans to it directly with the broth in which it cooked. Allow to boil and put in soup browned vegetables. Finely chop garlic and in a pan where you prepared roasting lightly fry. In boiling soup put garlic, salt and add spices to taste, I used black pepper, a few peppercorns of allspice, some coriander, Bay leaf, ground red paprika. Give writing a rolling boil for 3-5 minutes and switch off. Lean bean-rice soup in a pot
93 - - 2
When spring came my favorite fennel - well I could not pass up, very much I love him - and so was born the idea for this delicious soup. Hope you like it. Buckwheat soup with mushrooms
101 4 - -
"Fast from Moulinex" this is delicious and easy to prepare soup. Soup with giblets
73 - 80м -
Remember, Gleb Zheglov in the performance of Vladimir Vysotsky in the film "the meeting Place cannot be changed," in a break from detective services wanted "about the soup, Yes, with giblets!" Knew bloody was talking about! The soup really turns out very tasty, soft and fragrant. But if greens sprinkled, but the half-boiled egg to put, but the sour cream whiten, the mouth. Help yourself!