In ancient times existed in the vastness of one scandalous soobschestov cooks - kitchen_nax. Often in comments to some the next opus found a real treasure. Especially like me, often your companion generously scattered pearls seriously considering them worthless and all known garbage. Our ball is large enough that one hole was known even yesterday, the newborn kitten, the other in the same hole, but being literally hundreds of miles (well, okay, maybe not a hundred, but a thousand) were revelations from above. So, in one of his talks, someone from accomplices mentioned about the flavor of the dough for the dumplings as a self-evident way. For me this was an unusual and very next day I tried this technology in business. To say I was surprised is like saying: "... personal output of our Lord Jesus Christ in the Church during the Easter service caused some excitement" Since then, I flavored the dumplings more, perhaps, and did not eat. I quite admit that a good half of the readers/viewers know this open secret, but I know nothing! I consider absolutely unacceptable to hide such a find. 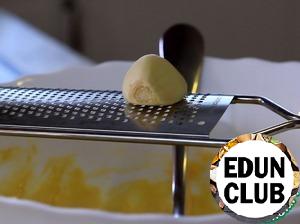 From chicken to cook the broth.
Softened butter to mix with eggs, pinch of salt and add the flour knead the dough. In the dough, grate the garlic clove. 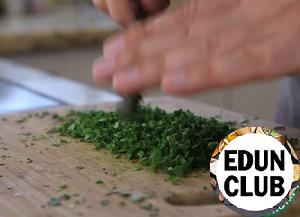 Cilantro finely chopped with a knife

Chopped cilantro to add to the dough. Into the broth put the ground coriander seeds. 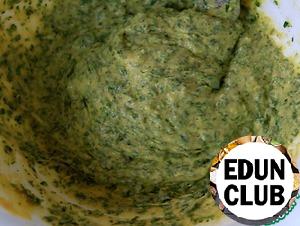 Mix until smooth. Put the dough with a teaspoon in the lightly boiling broth. The dumplings at a low boil will be ready in 5-7 minutes. Soup to rectify the salt and serve. Goulash soup with chicken stomachs
163 - - -
Frankly, the first time I ever cooked chicken gizzards. Seduced my people, who are good in it. Tried - delicious. Bought. And prepared the meat eaters-men here's a hearty, thick and tasty soup. Soup "Spring"
255 - 50м 6
A light spring soup, if served without sour cream and eggs, will make a great vegetarian dish. Tom Yam with coconut milk and shrimp
112 - 60м -
This is a great adapted version of the Thai soup. Soup Ogorodnikov-Botvinnik
239 4 20м 6
Summer. Holiday season. All gardeners are familiar with the procedure of thinning of the beds with your favorite vegetables: carrots, beets, etc. this soup is everything a vitamin, what a pity to throw away after thinning of these beds: plant beetroot, carrots and carrot tops, dill etc. the Soup is cooked quickly and VERY tasty! Vegetable soup "of Minestra"
126 - 50м 4
Variation on the theme of "Minestrone", but a few in our Russian interpretation. The recipe is assembled in the transfer of "the young lady and the cook," since often cooked, so decided to present this...