Tried many recipes, this, in it all is harmonious and delicious! It's soft, fluffy, fragrant muffin! Eaten all the cakes on the first day, the second not survive...

Ingredients for Easter cake "not Enough"

Step by step instruction of cooking Easter cake "not Enough" 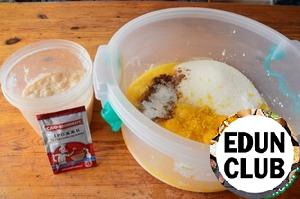 Cook foods to the test, they should all be at room temperature. Put the yeast mixture of warm milk, a tablespoon of sugar, a pinch of salt and a tablespoon of flour, put in a warm place. Other products (except flour) fold in a large bowl, immediately add the cinnamon, vanilla and lemon zest. After 20-30 minutes, the dough will rise. Pour the yeast mixture into the bowl with products, mix, knead, gradually adding flour until until the dough becomes elastic and begins to lag behind the hands. Add to the dough raisins. Flour may need less or more, depending on its qualities. Form the dough into a ball, place in a bowl and in a warm place, as in the test many muffin, will be a long climb. Two hours later, the dough punch down and let rise again After the second obmyvanija the dough to lay out on the forms, filling them about one third Bake in the oven at 170-180 C until Golden brown, remove from the mold, allow to cool. With a mixer beat whites with a pinch of salt until thick peaks, then gradually add the sugar and whisk. The resulting frosting to grease the tops of the cakes and sprinkle candy sprinkles 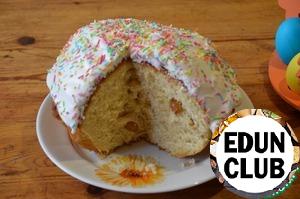 Bon appetit and Christ is Risen! Easter cake with chocolate
213 - 260м -
Each course has its own favorite and trusted recipe cakes, and I have, but for several years now I'm looking for new and interesting recipes of this wonderful baking, much new has already tested with our site, but the urge to experiment is strong. And here the user Nagira I found this interesting recipe from the book "Complete the necessary companion of urban and rural life," 1897. With my additions I stand it for you the court. The cake turned out incredibly flavorful and delicious! For all lovers of dense and flavorful muffins this cake is a godsend. Easter cakes
149 - 240м 20
For several years I use these recipes of cakes... after baking, the cakes are very delicate and airy... in a few days and the cakes stay soft and you can have time to entertain all your friends! Cakes "Express method"
231 - - -
A little always helped my grandmother bake cakes, then herself. Cakes for me - it's not just cakes, not just food - it is much more. Always bake a family recipe, but one year it so happened that there was no time nor effort, had a furnace according to the rapid method. They are without batch, all mixed and forms, after three hours in the oven. It's very simple!!! Dutch Easter bread
201 - 120м 8
I again to You with the Easter baking! Sweet bread that is baked for Easter in the Netherlands (Paasbrood). Flavored bread, in which the total weight of the filling exceeds the weight of flour. Despite the fact that the sugar in bread is small, it is sweet, delicious and flavorful. Cake for the yolks
146 - 480м 10
For the holiday shopping we went, as spy kids. I called the store, if you can come, put on masks and gloves. But all was calm. Holiday to be! In General, the tradition to bake cakes we have 6 years. Three favorite recipes, this year all that I want to share with you. It is soft and very porous. Hope You like it. Just be patient though, time in quarantine we now have plenty! Multicookings Redmond - my trusty assistant in the preparation of the test. Festive Cake with a secret
191 - 180м 10
For several years I use these recipes of cakes... after baking, the cakes are very delicate and airy... in a few days and the cakes stay soft and you can have time to entertain all your friends! Panettone
162 5 - -
Panettone, panettone (Italian. panettone, the Milanese dialect panetun) is a traditional Milanese Christmas cake. For a long time while looking for a recipe Easter cake, came across this interesting recipe rich yeast cake and decided that he, the most perfect cake.
More recipes