Soup with lentils and peppers Easy useful and also delicious soup as it is impossible by the way will be in a spring day. And not only spring, the soup looks nutritious and contains large amounts of vitamins.

Ingredients for Soup with lentils and peppers

Step by step instruction of cooking Soup with lentils and peppers While preparing the broth will cook zazharku. For this finely chop onions, carrots cut into thin strips. 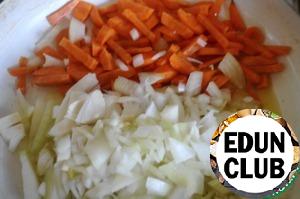 In a pan heat a small amount of olive oil and arrange the onion and carrots fry a little stirring constantly without letting boil. Fry for 2-3 minutes. 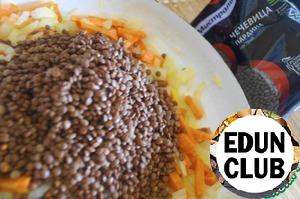 Here add the lentils TM Mistral Pardina and fry for another 5 minutes. When the broth is ready put it in fried vegetables and lentils. Cook for another 20 minutes until the lentils are tender. At the end of cooking sprinkle with salt and pepper. 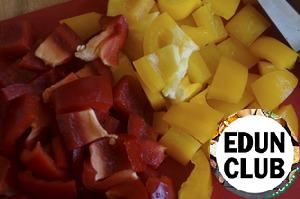 While the soup cook a little longer cut bell pepper in large pieces. I have peppers 2 colors: yellow and red. Heat in a pan with a little olive oil and lay the peppers fry for 2 minutes, add the coriander and cumin, sprinkle with salt and fry for another 3 minutes. Remove from the heat. Serving soup, pouring it into soup bowls, placing on top of the fried pieces of pepper. Bell peppers can be submitted in a separate bowl, then everyone will be able to put that quantity of pepper, which he needs. Bon appetit! 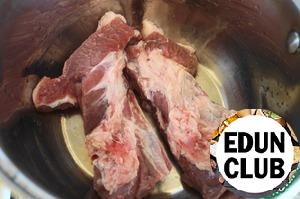 First, cook the broth, this pork ribs a good rinse in cool water. Put in a pot, fill with water and add the whole onions cleaned from the husk. Cook the broth for about 40 minutes. Soup with noodles and chicken dumplings
155 - - -
Cooked "cream Soup of kohlrabi with chicken dumpling". Well, first off, the dumplings turned out very much, and secondly, my soups though, and eats, but prefers normal. And so was born this soup. Kapustnyak of fresh cabbage
47 3 - -
Can you say that kapustnyak is brewed from fermented cabbage, but I like this version of the recipe. Try it and tell me your opinion. The red lentil soup with chicken
152 4 - -
Shorba adas-Mazrui. Very nice in cold time of the year, in our family, these soups are also prepared during Ramadan. This soup will open a series of soups of lentils, which cook in our family. Final photos thanks to scullion yuvl. Green soup
75 - 150м -
Extremely tasty and healthy dish. Thanks to sorrel and kefir, green soup has a nice sour taste. Try the green borscht is my mother's recipe, I'm sure you won't be disappointed. Cook this soup all year round. Vegetable soup with mushrooms and lentils
92 - - -
Who is that bald comb, and I just let to fast)) I Offer you a wonderful soup with dried mushrooms and red lentils. For all his lean soup is very hearty. And it's delicious!
More recipes