Each family has its favorite recipe for borscht, and I am no exception. But I recently saw a cooking show where one of the Actresses, Victoria Isakova, told and showed how prepared the soup her mother. Me this recipe impressed, and I decided to change their habits and cook borsch for this recipe. It turned out rich and flavorful! In one word, VKUSNOTISCHA!!! 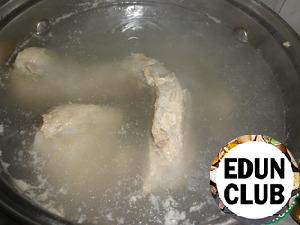 The first thing we put meat. Prescription recommend the use of beef ribs, I had pork bone and rib eye beef. But here, I think, a matter of taste, and it does not matter While the meat was boiling, I washed the greens (dill, parsley, cilantro), cut off tails and set aside - throw it, the top deferred to a separate plate, it will be needed later. Broth by the time the boil and need to remove Pankow (someone shoots, someone pours and makes the secondary broth - whichever you prefer).
Onions, carrots, peppers and tails from the green sent to the broth. Cook time depending on the meat. 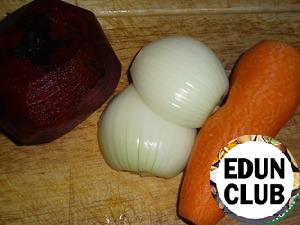 Meanwhile, let us zazharkoy. Peel the beets, onions and carrots. 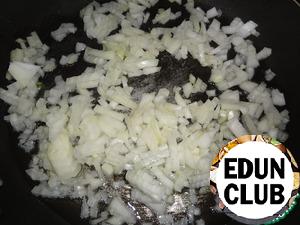 Finely cut onion into cubes and sent to the frying pan with a small amount of vegetable oil. 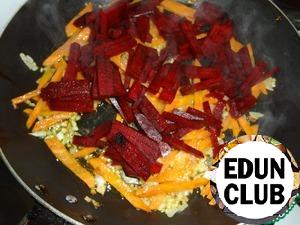 Then add the beets, also cut into strips. I took one large beet and one-half its cut. The other half went into the pot, where cooked meat slicing 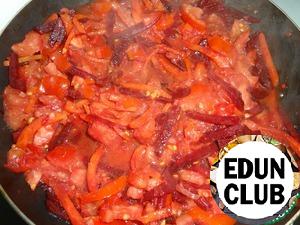 Then cut the unpeeled tomatoes into cubes. Add in zazharku. Mix well and keep on heat for about 3 minutes 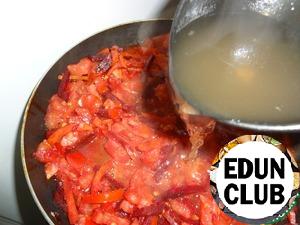 Add a ladle of broth in zazharku, so she had a good protesilas. Leave on the fire for 2 minutes At this time, I cleaned the garlic. How to take Zubkov is a matter of taste. Take out the vegetables and meat. Vegetables we do not need. Peeled potatoes cut into chunks and throw into the broth. While it cooks, 5-7 minutes, doing other things. Cut the meat, put back in pan Once the potatoes are ready, take out it in a plate and mash with a fork. Then send it back to the pot. To potatoes and add fried meat and cabbage (if you love to cabbage was soft, you can put her before; I like to have crisp). Once the broth begins to boil, add the bacon, garlic and parsley. Doselevel to taste. After boiling, boil for 1-2 minutes.
Then turn off the gas and allow to infuse for 10 minutes. Serve the borsch with sour cream and herbs (cilantro and parsley).
All a pleasant appetite! Soup "Spicy" with bulgur
95 - - -
The winter season is in full..., the snowfall we have every day. Warm up a thick, hearty soup with spicy additives. The next day he even tastier. Borsch
106 3 90м 8
The theme is quite trite, but I cook the soup. Sometimes fed him dumplings with lard, but very rarely. Young Housewives note. Vegetable soup with mushrooms
108 4 - -
Share with you, my good, my vegetable soup. My peasants felt it a good choice. Maybe your home will not abandon him. Soup a classic from my childhood mom's
79 - 125м -
Borsch recipes a great multitude, put his option, be sure Burgundy color, with classic, hearty, rich flavor. This soup is especially loved by all family members and friends, who admire him every time and say this is the most delicious soup they ever tasted. The recipe is very detailed. Soup with mushrooms
93 - - -
I'll try to surprise you today soup.. Well, it would seem that the famous dish, why do it then post again? Still, I'll take the risk. One year I gathered the secrets of its preparation and, in the end, there was this recipe. I hope it will be useful to young Housewives in order to win their favorite men. Do not worry a large number of steps and photos. It is actually much easier. Family soup
91 - 40м 8
This soup taught to cook, my dad, and his grandma taught. The soup turns out excellent, always bright scarlet color and useful for one thing... cooking!!! Favorite soup
95 3.5 60м 3
This soup loves my husband. Perhaps this is the only dish that he can eat two days in a row.
More recipes