Juicy sausage made from Turkey thigh In the last photodamage upload photos of the raw Turkey sausage, and now represent its own recipe. I advise you to cook out of delicious juicy sausage that can be served immediately, hot and can be cooled and sliced as a cold appetizer. If you don't add peppers, it is possible to give children (well, for very little more garlic added). And if you do not add the Turkey fat, then the meal will be the diet, but the fat tastes better. Even in the recipe I'll give two of my favorite method of heat processing of home-made. In General - go!

Ingredients for Juicy sausage made from Turkey thigh Perfect for the Turkey sausage is suitable thigh. I had enough large: 1 kg boneless. You can take a couple less. Then out comes the grinder. We need two lattices: large and small. Meat with tendons and pellicles grind on a fine grid. On a large lattice smallive fat and skin. Clean fillet cut into cubes of about 0.7 mm. All the joins. Add salt, pepper, crushed garlic. I love a lot of garlic, so I got a 5 tooth. Can take less. I repeat, the kiddies these spices can not put. If there is a nozzle for a meat grinder for the sausage, then use it. If, like me, have no, cut the neck of a plastic bottle, put it one the edge of the bowel, lock thread. The second edge of the gut tie in a knot. 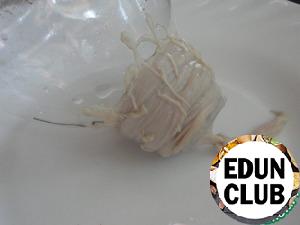 Pull the gut to the neck like an accordion. Now we need to be patient and fill the colon with minced meat with a spoon or just with your hands (as the saying goes: finger phanye). Try to fill up to not have bubbles. Below I give two options for the preparation of sausages. The first preliminary boiling, and then frying in a pan (grill, BBQ). The second bake in the oven with broth. For the first option, the sausage can be filled with minced meat tightly, for a second – not very tight. After filling the intestine to form a small sausage, and it is possible to twist the sausage coil and re-thread. In many recipes suggest homemade sausage, pierce the sausage in several places with a needle. Because when heated, the stuffing will increase and the sausage may burst. If the sausage is Packed very densely, it is desirable to do so. I prefer not to fill very tightly and do not puncture, then poured out the juice. In fairness I admit that the cases of the bursting of the sausage I had, but most everything was in order. So decide for yourself what to do. And so, the first way of cooking. Heat the water to about 70 degrees. There omit the sausage, cover and cook on slow fire about 30 minutes. Ie the sausage is cooking, but not boiling. Omit the sausage in cold water. Keep for 15 minutes. Through this technique, the sausage will shrink. 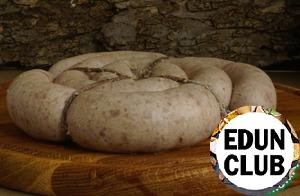 Get this for myself boiled half-finished. Although it is not prefabricated. The sausage is already possible without preliminary roasting. Heat treatment is enough. It is stored in the refrigerator up to 3 days. But if she could go to the freezer, can be stored long enough. Frozen sausage is stored for at least 1 month, or even longer. Such a sausage before eating it is desirable to fry in a small amount of vegetable oil. From both sides, until Golden brown. And can on the grill or the grill.
If You have such a workpiece, and came to the unexpected guests, it can be removed from moosilauke, clear from ice, wipe with paper towel and fry under a cover on slow heat in a little oil for 10 minutes on each side. During this time, the sausage can thaw and fry. The second option. Put raw sausage in the baking dish. Remove the foil and bake for 30 minutes until Browning. The broth is partially vaporized and partly absorbed into the sausage, which makes it incredibly juicy. Can this sausage podate as hot as a main dish or as a cold appetizer. Christmas Turkey baked in the oven
53 - - -
Cuisine of Turkey is very popular in America. And of course it is prepared for a holidays. This recipe for Christmas Turkey that I saw and first tried a few years ago and since then it has become one of our favorite dishes. It is very simple, quick to prepare and used for the preparation of the ingredients, which are always in the house every housewife. Help yourself! Meatballs from Turkey with prunes and vegetables
94 - 90м 6
Low-calorie dish of Turkey with spicy original taste cooked in the oven. Turkey "goslawski" with peanut sauce
130 - 45м 6
The recipe I saw in the program "the dinner Party". "Golanski" - because it prepared the party for the profession "minstrel". We liked it, and you try! Souffle of Turkey
97 3 30м 10
Originality is not claimed. Just wanted souplesse. Because I have a sick stomach, cooked without spices. For photos thanks scullion yuvl. Roast Turkey with pepper
95 - 50м 8
The recipe is not completely original, but the original caught in the waves of the Internet, proposed the Turkey meat to turn into mincemeat. In addition, there were no hot peppers. And how without it?! Well, maybe not burning, Chile, but, for example, Hungarian pepper – I often use in cooking meat and poultry. And to turn the meat red Turkey meat seemed a sacrilege. Well, some roast meat? It is important for this recipe, make it red Turkey meat, and preferably not frozen, and chilled. In addition to the listed ingredients for the sauce, I used 2 tbsp of fish sauce - it was not in the List the correct ingredients. Brizol "Summer"
114 - 30м 12
Such brizola really help when on the threshold of the guests, and I want a quick hand to cook something hearty, unusual and beautiful!!
More recipes