Kalia - a spicy, thick soup with a spicy and thick in consistency broth, cooked with the addition of brine, most often, cucumber. There are three types of first courses of this kind: Kalia, rassolnik and Solyanka. They are all very tasty and different from one another by the presence or grains, or potatoes, or other additives and, of course, the level of spiciness. Cal cook fish, meat, chicken broth or broth of fowl. Homeland cagli Finland and originally the soup was made only on fish broth (kala - fish), the more interesting how the soup was to belong to the Russian cuisine. Cal I cooked in chicken broth was very tasty, I recommend to try. Products. Products a lot, but the cooking process is simple. Raw piece of chicken I had pre-boiled in salted water on low heat (this step I have omitted), the presence of ready-made broth (about 1.5-RA l) is assumed. 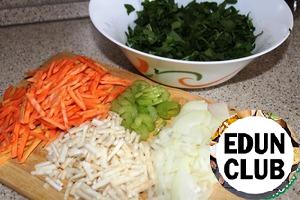 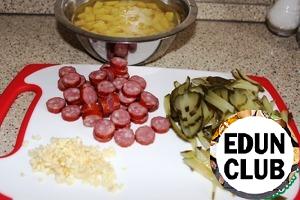 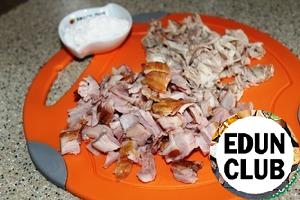 Chicken (boiled and smoked) cut into small pieces.
next to the meat perched flour. Prepared vegetables, except the spinach, fry in a little vegetable oil and stew under a lid until soft (about 10 minutes). At the same time boil the potatoes until soft in chicken broth (about a Cup of broth and place them molded). To the vegetables add the spinach and simmer for another 5 - 6 minutes. The broth to the potatoes sent with spinach stewed vegetables, chicken meat and bring to a boil. While the broth is boiling, fry on a dry pan until light brown flour (while stirring). Flour bred, before left the broth, and pour in the prepared soup. proverjaem soup about 10 minutes after boiling. 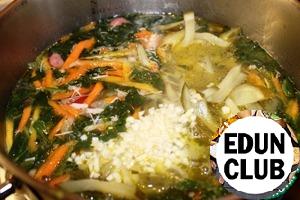 2-3 minutes before end of cooking add to soup, garlic, salt and pepper. 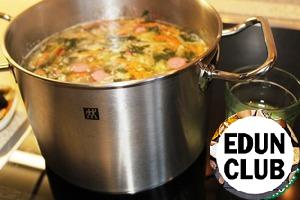 At the end of cooking the soup, pour the brine (I have cucumber, but the cabbage), bring to a boil and remove from heat. Mexican soup "Albondigas"
100 - - -
Incredibly delicious soup, full-bodied, Very flavorful... we all liked. I hope that you will like. Rice soup with cheese and mushrooms
85 - - -
The soup has a delicate creamy taste, mushrooms, rice and meat - a very satisfying combination and very tasty. Moroccan soup "Harer"
271 - - -
This soup devout Muslims eat once a year during Ramadan. Not only at dinner (after sunset), but in the morning (before sunrise). My question: - "Why this dish is eaten during Ramadan?" the answer: "very Satisfying. If eaten in the morning, all day do not want to eat". And this is very important because during Ramadan Muslims are not allowed not only eat, but to drink from the onset of the morning prayer of Fajr until the evening prayer Maghrib. The recipe for this dish was posted on the website in 2010 by the user syndys called "Moroccan soup "Harer" and is illustrated with me in the framework of "Coloring". Red soup with edges with anti-hangover effect
57 - 60м 5
Red soup has a nepritorny acidity from the tomatoes, good fat from the meat and, in General, promotes good recovery after well and having fun in the evening :) And he is very aromatic and simply delicious, cooked very quickly, if you don't count the cooking time of the broth. French onion soup
62 - - -
I think there are lots of recipes onion soup... but cooked and it was delicious after the cold, decided to recall the famous recipe))) Soup of the fern in the far Eastern
123 - 90м 10
A simple and delicious soup that tastes just like mushroom. Regular soup dumplings with unusual
61 4 40м 4
We do not like to eat in a row the same soup. So I always experiment. Soup is very easy to make, unusual and delicious. I'm sure that everyone will enjoy, especially the kiddies. Vegetable buckwheat-rice soup
154 - 40м 4
The soup is cooked simply and quickly, it is lean, absolutely no oil, but no less tasty and satisfying. Rice and buckwheat will give you a boost of energy for a long time!
More recipes