The best sausage is Kazi the Kazakhs say, as, indeed, Kyrgyz and Uzbeks. Historically, the nomads (nomads) were not able to use vegetable food, therefore, summer eating dairy product. and in the winter cooked meat. Imagine scoring a Kazakh horse, and he weighs under a ton. Just do not eat meat need to keep. One of the favorite recipes horse meat, it's Kazi. Today, I will say for Almaty, Kaza can be bought even at the supermarket, which I did the other day. and was wildly disappointed. The meat was gamy and tough. despite the fact that I cooked it for 3 hours. Therefore, once on the Green Bazaar (in Almaty's Central Bazaar), on the eve of the school year, because there was able to buy a school uniform so like and not at exorbitant price. Fate brought me after buying forms and shirts in butcher row, where I, quite by accident, bought about 7 lbs of horse meat and intestines. There, on the Green Bazaar, Kazi often at the request of buyers Packed into the intestine directly into the eyes of the customer, in order to eliminate fraud and zapihivanie poor quality of meat. Once, a couple years ago, I brought sogym (ғth). Traditionally, it is harvesting meat for the winter. In my case, distant relatives, they killed a horse and part of the meat distributed to relatives. What to do with a bag of horse meat? To make Kazi! Did it intuitively, remembering doing in the market. it turned out not worse, and maybe better, at least to the taste, so said the husband and children. And today, povspominat your experience, reading recipes in the Internet and Povarov, I cook the favorite dish of Kazakhs - Kazi. Kazi is a dish of the holiday table. At any wedding, funeral, birthdays and the New Year you will find the Kazakh cut into thin slices Kazi. Meat, the original is a long piece with the ribs, wash, garlic peel, horse guts I got washed, but just in case, again washed (inside) several times in cold water, 1 time hot and once a strong saline solution. Salt and garlic in a ratio of 1 to 1, and a teaspoon of pepper because prepare for the pepper I take less mixed. It turns a grayish mush. 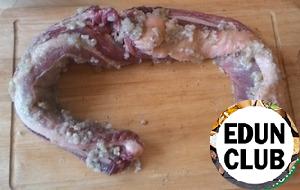 The resulting mixture is rubbed into meat. The point is that more than necessary will not annoy, though rubbed, and leave the top nice. Because I am not 1 sausage, and STOCK, in addition to the ribs I took and just meat that is pre-cut so as to obtain long, thick strips to the diameter of intestines. importantly, the meat was not chunks, and whole, otherwise it will suzyq ( Wұzhyқ). Again, Kazi, is the meat from the ribs, there is fat and meat, depending on how the horse fattened, and such proportion. a piece of fat that was on the meat, I also cut into strips and add at stuffing those sausages. Meat is left to marinate for an hour. Although it is possible for a day. I just stuffed the sausages leave to marinate for a day not to fence the garden again., Again, when you buy goat meat at the market, when you RUB it and stuff, and then you yourself can full Kazi hold a day or even more. But you can dry, as did my ancestors, because the refrigerator they had, and mediocrity Kazi, it is stored, especially if you put it in the flour, and on festive occasions pulled out and cooking. The meat in the gut are distributed not tight, they squeeze hands to make it more equitable ends, retreating inch by inch, tie tightly with string. I went from 7 kg of meat and guts, because I bought everything together at one price, 10 sausages, really thin. Usually, one Kazi weighs about 1 kilogram, and then, if short. All sausages, except one, lay in the refrigerator, where I will at least need to get cooking. Kazi already marinated over night in a bowl in the fridge. Elected Kazi put into cold water in a saucepan and put on medium heat. Kazi endures, may burst the gut. When the water begins to boil, pierce the sausage in several places, usually with the edges and in the middle of the toothpick, with a specific sound, bruuuu from Kazi to get the juice and some bubbles. can be slightly more poke. Then reduce the heat to barely boiling and leave to cook lid open, up to 3 hours. In many recipes, they say about 1.5 or 2 hours, but horse meat is tough and the longer cooked, the more tender. As boiling hot water is added from the kettle. Oh, by the way, water not salt, because salt in the Kazi very much, and the surplus go into the water as boiling. 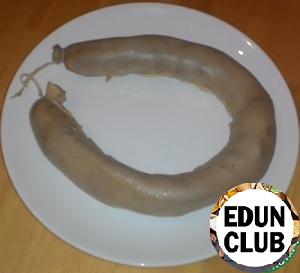 Kazy is cooked. Now it must be cool, then, preferably dostudio in the fridge. If the cut immediately hot, the thickness of the circles will be too big. So Kazi is ready, Yes, and then cooled. Cut into thin slices 3 mm. Mmmm yummy. And my children just love it! Snack on a rice plate
427 - - -
This is not really a recipe, but a method of supplying refreshments. I have crunchy rice on the plate beautifully situated chicken with vegetables. You may want to put on a plate any other snack. Meat appetizer with apples
386 - - -
Spend an hour of their time to prepare this dish, especially if you have planned a picnic. There are salty notes, and spicy... and sweet. This snack is really very tasty. It's not like some simple meat pies, because there is the acidity and sweetness of the apples... Sausage of beef "Cherkassky"
0.5k - - -
Love homemade sausages in different forms. Recently found on the Internet so here is a variant of sausages from beef. Personally, I liked the result, so I share them. Moreover, because preparing sausage of beef without adding fat and grease, they come out like sausage quite low-calorie. Ideal for those who are watching a figure. Bon appetit! Kebabs in the leaves of wild garlic
386 - - -
On the street the sun and the birds sing, flowers bloom, and so I want something else unusual. I offer you a very quick recipe of shashlik with sauce - tasty and quickly prepared. Meat pudding with vegetables
489 - - -
Another option meats. Delicious, both hot and cold. It is not greasy and not heavy dish. In addition to meat and vegetables includes rice, and pudding perfectly nourishes without bread.