Spaghetti with spinach and Adyghe cheese Fragrant and hearty dish that I cooked for lunch on our wedding anniversary. Idea found on the website Jamie Oliver.

Ingredients for Spaghetti with spinach and Adyghe cheese 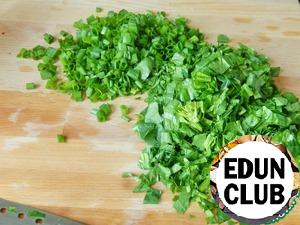 Put water for pasta in a large pot. The green onion and spinach sliced, white parts of the onions over. Spinach and onion pripuskaet in hot olive oil until soft. Shift from the pan into a bowl. 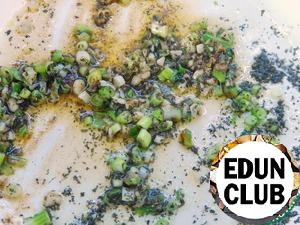 In a pan pour a little more oil, fry in oil chopped garlic, white part of onion, add the Basil and nutmeg. Heat over all until the appearance of a pleasant aroma. Included to warm up the oven at 170-180 degrees. Spice put tomatoes in own juice, pour in the soy sauce. Bring to a boil and switch off. To the spinach add chopped soft cheese and 50g of grated cheese, all mix well. 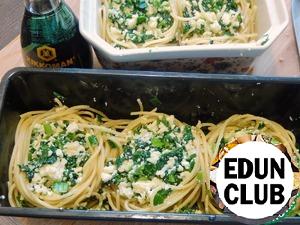 When water for pasta is boiling, put them all to uvarivaetsja, they should be flexible, I have cooked about 4 minutes. Recline in a colander. Next two options. First: quickly plug formed from hot spaghetti nests 5pcs. and put into a suitable dish, so they will be sticky, and the nest will not disperse. Second: wash the spaghetti with cold water, and then moulded socket with a fork, the spaghetti will not stick and will spread a little when placing. In the centre of the nests laid the cheese filling. When laying I have slightly lifted the sides of the nests. Then on the perimeter and between nests pour tomato sauce. On top sprinkle with shredded mozzarella, bake it in the oven for 15-20 minutes. "Orange" spaghetti with shrimp
87 4 20м 3
For lovers of original dishes. Pasta with chard and Parmesan
74 - 15м 2
Chard or leaf beet is a useful, undemanding in cultivation a vegetable, constituting a worthy competition to the spinach, cabbage or Peking cabbage and celery. Has a subtle, delicate flavor, can be used as raw and steamed or boiled. I want to offer you a simple but very useful and vitamin dish. Almost Italian. Italian pasta pappardelle
119 - 60м 3
Popular form of Italian pasta. Appearing in the menu of national restaurants, the dish is confused by the discordant name, but the audience quickly appreciated its advantages. Pappardelle, flat noodles, a width of about 2 inches. It is similar to noodles tagliatelle, but wider and usually shorter. In addition, papardelle, unlike the tagliatelle, the edge of the "steep" and not fades away. In contrast to the tender tagliatelle, pappardelle is served with more rich sauces, this pasta often accompanies poultry or lamb. A classic example: if tagliatelle is usually served with meat domestic rabbit, pappardelle – hare. Gluten-free pasta with sauce and tofu
235 - 30м 1
This dish is perfect for people with gluten intolerance and vegetarians. Pasta "Alfredo" home
83 - - 3
Simple but exquisite, the sauce was invented by Alfredo Di Lelio owner of the restaurant Alfredo alla Scrofa in Rome for his ill wife. Sauce it my dear half so much that he included, according to legend, his restaurant's menu. I present a free reading of this classic sauce. Gentle, creamy, with two kinds of cheese and chicken sauce for pasta will appeal to all family members from young to old.