Ingredients for Sprats at home

Step by step instruction of cooking Sprats at home 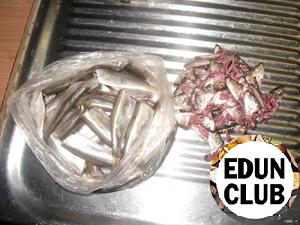 Prepared a glass cefiro (3чл of tea per Cup of boiling water),
gave it for 15 min. Dissolved vegetable stock cube,and,ATTENTION!, 1 tsp "Liquid smoke" (brought from Moscow,we have not sold,must have been terribly carcinogenic stuff.But after reading what goes into sprats in factories,were even pleased.The first test, and in scanty quantity ).Took a leaf Lavrushka and 100 grams - 150 sunflower oil was prepared and spread on the pan. After boiling,I switched over to the smallest mode under the hood.
After about an hour opened and tried. The dorsal bone is felt,therefore, left on the stove for another half-hour.Pulled
a little try.
Eat quietly,I realized - canned rest of the house was not necessary
for this snack,I put it on ice and immediately went to the store.
For a drink - excellent!Put all in a jar ,kind of decent,though photos do not come out. Chopped herring bavarois
120 - - -
A great cold snack that is served on black bread. The only negative - it is infused in the refrigerator for a day, so we could not resist - tried after 12 hours - it's very tasty! Jellied paste with shrimp
124 - - -
Easy to make, elegant holiday dish. Before I baked tabletki itself. Now you can buy ready-made in cooking, and in the supermarkte. It is a very easy task and speeds up the process. Very convenient. But if you want you can bake the cakes yourself for anyone, know, recipe. Herring "Favorite"
117 4 20м 6
After I learned this recipe from a friend, salted herring in the store, we no longer buy. Herring "Country option"
94 - 10м 4
At the cottage and at home, of course, friends, no fish in the food is not! Another option you a simple offer! The herring with Apple very much! Imagine summer evening we table friends gather! Cooking is so fast and simple all you need! Each other support and make friends! Sour cream, apples and horseradish, herring, onion we captured! What are the best to wish! Let's test we shoot! Escabeche of capelin
96 - - -
The most difficult and tedious part of this recipe is to cut the fish, the rest is done very quickly, after a little wait and you can enjoy the result. Salted herring in marinade
99 - 20м 6
Tasty, delicious and again delicious herring!!! This recipe makes the herring for many years!!! Time-tested!!! And despite the fact that there is vinegar (it there quite a bit) the herring can be safely called salty! Squid stuffed with liver of cod, a couple
124 - 40м 2
Love seafood and experimenting with them. It seems to me, squid with cod liver - a great combination! Try it and you... recommended! Pies with fish and rice "fishing"
109 - 120м 12
For all who love fishing and just eat the fish, I suggest eateries pies - pies "fishing". The mince from two fish species and rice. Location good and are juicy and tender. This time the fish for them was "caught" on the store shelf, but nothing happened ultimately, all quite inexpensively. So I hope You like it.
More recipes