Peppers stuffed with potato and chicken Decided to deviate from the standards of the filler stuffed peppers... and instead of rice add the POTATOES!)))Very unexpected... in the finished look was mouth-watering filling.

Ingredients for Peppers stuffed with potato and chicken Boil the chicken breast in small amount of water. Large onion finely chopped and fry until transparent. Tomato peel. Finely chop and add to the onions. Simmer over low heat, stirring occasionally, until evaporation of all the liquid. Boiled chicken fillet cut into small pieces and grind in a blender. Onion, tomato and shredded chicken in a bowl. Clean grate raw potatoes on a fine grater, grate Carrots on a fine grater. Half of carrot to add to the stuffing. Add curry, Basil, garlic powder. Season with salt to taste. Mix well everything. 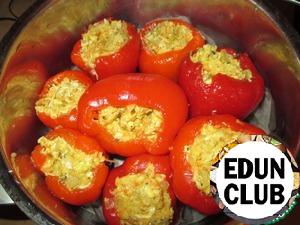 Stuff the peppers with this stuffing. To spread in appropriate the volume pot. Now the sauce.
The broth, which remained from the chicken, add the tomato paste, the second part of grated carrots, add garlic powder tablespoon incomplete, a tablespoon of sugar (to taste), curry less than two teaspoons, salt to taste. To be filled with water to the desired volume of liquid, enough to cover the peppers in the pan. 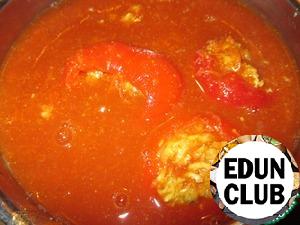 Carefully stir the sauce and pour it over the peppers in the pan so that they were covered with liquid. Put on low fire. Cover with a lid and simmer for 30-40 minutes. When the peppers are ready, turn off the gas under them and leave for 30 minutes. I though all night they insisted). In General, here and peppers)Filling tender... help yourself! Chicken in Chinese
346 5 40м 4
I have already posted this recipe, but without the photo. That is now decided, step by step and clearly. Very tasty, interesting, nutritious and healthy dish. How it relates to Chinese cuisine - did you know our family it is called all my adult life. At first glance, rather strange combination of products - but in the end, an excellent dish. Even my husband - an ardent opponent of the exotic, with pleasure eats a meal like this! 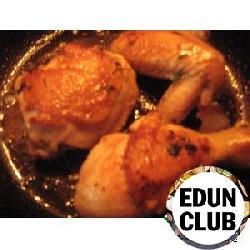 Secret chicken-2
0.5k - 120м 4
Continue to share with you my "chicken secrets". The chicken turns out very juicy, flavorful and delicious, and, importantly, the time cooking takes much less than in the first embodiment, and it is immediately with garnish! Chicken breast, baked tangerine juice
312 - 40м 2
This recipe has elegant taste and simple preparation method. Your family and guests will love breast turns out tender and not dry. And there is soaring aroma of Mandarin.
More recipes