Buckwheat porridge with meat, baked in the pumpkin Kashi, so loved by our ancestors nearly lost their popularity and are prepared in most families infrequently. What if you cook real buckwheat porridge in the pumpkin? Even the most finicky eater will not refuse to try the original in appearance and delicious dish. Porridge in the pumpkin not only taste good, but also useful. Buckwheat porridge baked in a pumpkin, it turns out delicious and flavorful, cook it for a long time, but it's easy. This gruel is very useful. The cooking time of the porridge depends on the size of the pumpkin.

Ingredients for Buckwheat porridge with meat, baked in the pumpkin

Step by step instruction of cooking Buckwheat porridge with meat, baked in the pumpkin Of a pumpkin, cut a lid, remove seeds and fibers. Leave the stalk to easily remove the lid of a pumpkin. Cut onion into cubes and fry in vegetable oil Add the beef, diced, and continue to fry until the meat is cooked Buckwheat mixed with fried onions and meat, sprinkle with salt. Buckwheat with meat put into a pumpkin 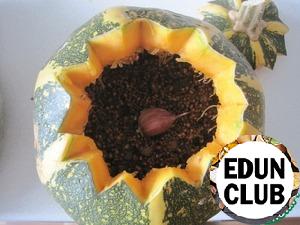 Pumpkin is filled halfway, put the clove of garlic. Pour water, cover and bake for 1.5 hours. Preferably after baking, let stand for a pumpkin with buckwheat in the oven turned off for about an hour. Porridge becomes loose, lush, delicious. Rice and blueberry porridge
0.9k - 55м 2
They say that in the house where you eat blueberries, the doctor is nothing to do. Today prepared rice porridge on blueberry broth. Oatmeal
0.8k - 3м 1
In the morning, is usually not enough time to cook oatmeal. This porridge is good that is cooked in minutes and turns out very tender. Porridge with egg in the village
475 - - 1
Offer the recipe of one of my favorite late Sunday Breakfast for my men - it's delicious and very satisfying, and very helpful. To eat such a portion, it is possible to get them for the whole day. Help yourself! The recipe was long ago borrowed from arx0nt, many times cooked and eaten. Eat porridge you need immediately while it's hot and flavorful, and the cheese is inexorably heats up and melts between oatmeal and scrambled eggs, then stretches thin filaments with a spoon. Pumpkin millet porridge
489 - 40м 8
I love the pumpkin in different variations! And for Breakfast, of course, pumpkin porridge! I tried to cook it with different cereals and for himself, came to the conclusion that the most delicious pumpkin kasha with millet! now share with You! Millet porridge
0.6k - - -
Based on recipe millet porridge. Turned out very tasty porridge, for which the author of the recipe thank you.
More recipes