My husband is a hunter. Now we have hunting season for pheasant, my husband has already brought in a few pieces. I decided to look for interesting recipes. So, it turns out, there's a pheasant in French. I offer you this recipe. So you can cook, of course, and chicken.

Ingredients for Pheasant in French

Step by step instruction of cooking Pheasant in French Here, a bird in a purified form was in my presence. 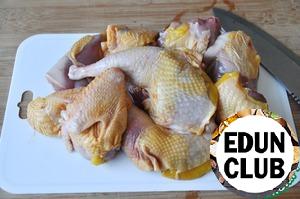 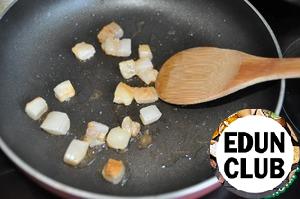 Bacon cut into cubes and fry in a pan until the lard melting. Put in a pan the pieces of the pheasant and fry on both sides until Golden brown. Sprinkle with salt and pepper. Remove the pheasant in a convenient form for baking, I have a regular deep ceramic plate. Meanwhile, make the sauce. To the remaining pan fat with the juice add the wine, chicken broth, honey, lemon zest, rosemary, thyme, dried parsley. Bring all to a boil. 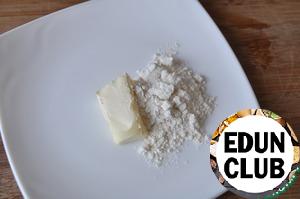 Next, you need to prepare Burr-Mani (beurre manie) or "oil Mani". It is a mixture of butter and flour. This mixture is used in the preparation of most sauces, European dishes, as a thickener, and good that not just saves time and improves the taste and appearance of the sauce, but it is still possible to prepare for the future.
Take soft butter and flour (by proportion 1 to 1). Mix the butter and flour until a homogeneous dough. We divide the dough into small portion balls, put them on a Board, sprinkled with flour, freeze, put in plastic container or package. Stored in the freezer. To thicken sauce, add the marbles Burr-Mani, stirring until dissolved. 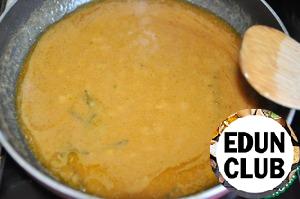 Bring the sauce to a boil. No lumps in your sauce will be! Pour the sauce over the pheasant, cover with a lid or foil and put in heated to 180 degrees oven and bake 1 hour. Quail with mushrooms and a side of bulgur
364 - - -
This recipe is quail can be cooked a chicken or other fowl. Mushrooms better to take the forest, and serve with a side dish of bulgur, which we call pilafi. Quail with apples and oranges
329 - - -
I bought quail here. The game is not cheap, because rare in our house. Long shovel and there in search of exactly how to cook them, and in the end combined ideas from several recipes in one! So this site is definitely not! Casserole of wild duck Cacciatore
498 - - -
Brought us the familiar hunter two carcasses of wild ducks. I haven't had time to wonder what to do with it-how my husband got into stocks cookbooks and dug up two recipes that were very successful. So, the first dish... Quail Christmas
0.5k - - 4
I hasten to congratulate all a Happy New year and to treat tender juicy quail stuffed with pineapple and tangerines. Grouse fried
0.6k - - -
In September, offers hunting for grouse. The bird is small, but very tasty, and the hunt for her athletic and exciting. In cooking a grouse special secrets. Quail in white wine with leeks and carrots
0.6k - 120м 3
Every time I see the sale in the birds, buy them in large quantities, and then think, think, think with them to cook) so decided to experiment and the result exceeded expectations - the dish is beautiful, delicate, fragrant and very elegant, if I may say so) Duck in sour cream
395 4.5 180м -
For hunters and their wives... a fairly simple recipe, how to cook a delicious and very soft chicken)...
More recipes