Festive version of the dumplings to suit all tastes at once. We always make dumplings on New year, old style, but not simple, and chudinkoy and surprises. Even during the week the children (adults) on the phone to find out whether this year's dumplings and. Decided this year to do a double surprise... Since children love pierogi with potatoes and onions, I green beans, and my husband is Georgian variant of "query" - with cheese, and along with the sauerkraut, I decided to choose following products: 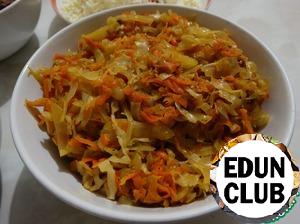 Fry the carrots, onion (3 pieces) until Golden brown, add washed and wrung sauerkraut, pepper to taste. Simmer until tender cabbage.
In a separate pan fry the remaining onion until tender. 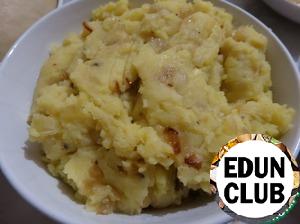 When the potato is cooked, drain off water, pounded into a puree, add black pepper, salt and part of the fried onions. Stir. Soft cheese three on a fine grater, add the sweet paprika. If the cheese is not salty, add salt to taste. The dough for the dumplings, prepare custard by the way. For this flour in the amount of 3 glass pour slide in a large bowl, previously passed. Add 3 tbsp. of vegetable oil and salt, on top of the parts, pour boiling water, kneading the dough. Choux dough is thoroughly kneaded with a spoon. When it has cooled slightly, add the eggs one by one stirring constantly. Then in the dough add the flour, and as soon as it becomes more dense, spread on the table with flour, knead until smooth. Put the dough in a plastic bag, aged for 1 hour at room temperature. After the "rest" the dough has a pleasant softness and malleability, holds its shape well. Very nice to work with him: not sticky, quickly Severinets, plastic. Roll out the dough into a large pellet with a thickness of 2-3 mm. Cut out a round notch circles, trim put back into the pack.
Circles folded in pairs on top of each other, a little forced in diameter so that they glued together, but not cutting through. I adapted this wooden spatula. Next, put the filling between the two halves from one side, fasten the edge. The second half is stuffed with other fillings, just clipping the edge.
In the dumpling on one side cheese, with other toppings of beans. Then in a circle doing pintucks that the dumpling assumes a more aesthetic appearance and additional strength. And at the request of my picky did the usual dumplings, not forgetting to put different surprises in the form of money, sugar, pepper, etc. Dumplings for 7-10 PCs drop it into boiling water, avoiding violent boiling. Cooking time 5 minutes after boiling. Immediately spread in the plate and serve with sour cream and fried onions. On the fault double Fudge. The beans smell so appetizing, and the cheese is melted and slightly stretches. Dumplings A La Gnocchi
139 - 20м -
The kids eat these beautiful dumplings at the speed of light! Note the unusual appearance of these lazy dumplings. Dumplings with secret with buckwheat and mushroom filling
304 - 60м -
The secret to dumplings is not in the coin by chance found in the dumpling, and the dough recipe. This secret was suggested to me by my grandmother. For many years she worked as a chef the dining room, and these dumplings were in great demand. Dumplings are very lush, even if not cooking for a couple. Try. Dumplings with cherries
67 - - -
Family grandma's recipe. Vareniki with cherries – one of the most delicious summer dishes. The smell of the summer berries, its juiciness, acidity and vivid colors transform into a masterpiece a favorite dish from even the most simple test for the dumplings. Ravioli with cheese and cottage cheese
88 - 30м 4
Ravioli is essentially the Italian version of our family of dumplings. Cute squares with a delicious filling will be a real decoration of the table. Cook them very simply, there is no need to sculpt each dumpling separately. This is a simple and quick recipe for delicious ravioli that does not leave You indifferent. Dumplings with Apple filling
44 - - -
Another recipe from the book the Holiday table. These sweet dumplings are offered on the dessert menu autumn dinner. But it's a great Breakfast for the whole family, or dinner for girls. Apple dumplings. Fast, simple, of low products. Dumplings with bacon and onions
92 - - -
To understand how a dish made of flour can be delicious, you tasted such dumplings. Fragrant pork chops with onions will fill the dumplings taste the unforgettable flavor and sophistication. Look, cook and enjoy!