Vereshchaka one of the kinds of machanka – meat sauce, which dipped pancakes. The author of the recipe – the Royal kukhmistr Vereshchaka. Versace is one of the most famous dishes of Belarusian cuisine, and in different localities in the traditional recipe have their own original features. But it is boiled in a mixture of water, spices and beer and veal sausage. Vereshchaka and served with pancakes or hash Browns. How it all came together in this recipe: sausages and beer for her husband, who is not holding post; buckwheat pancakes for me. The pancakes I got lean and I filed them with lean chocolate sauce. It was very tasty! I hope that this recipe will love it! 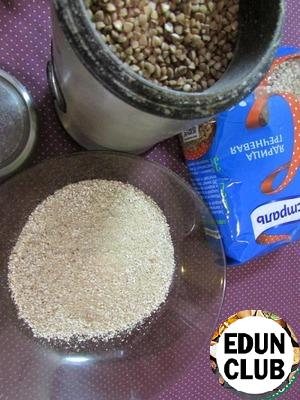 Buckwheat pancakes, of course, you can use buckwheat flour. But I made the flour from buckwheat groats Mistral. Cook it very simple. Cereal skip several times through a coffee grinder.

Then sift through a sieve. 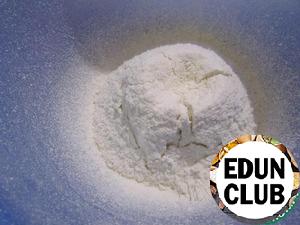 Be sure to sift and wheat flour. In the evening from 0.5 cups of buckwheat and 0.5 cups of wheat flour, yeast and 0.5 cups of water knead a sticky dough (a little thicker than for pancakes). The dishes with the dough, cover tightly with cling film. And put it overnight in the fridge. Cover the bowl with cling film and place in a warm, draft-free place for 1.5-2 hours. The dough rises, about 2 times. Half an hour before baking to add to the dough is very hot (almost boiling) water, approximately 0.5 cups to make batter thick liquid cream. The dough will be very hard to bubble. Before baking add a couple of tablespoons of vegetable oil. The first time grease the pan with vegetable oil. Pour into the pan the dough fairly thin layer, evenly distributed over the entire surface. Fry the pancakes on both sides. Put in a saucepan the sausages. Put on high heat, bring to a boil. Reduce the heat to low and cook sausage for about 30 minutes. Onion peel and cut into half rings. 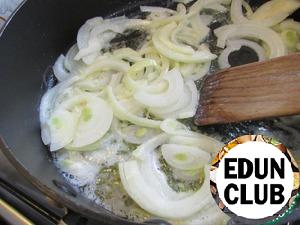 Fry the onions on medium heat until soft. Then add the flour and cook, stirring, about a minute. Remove from heat and set aside. Sausages remove from broth and cut into pieces. In the boiling broth while stirring, introduce the onion sauté. 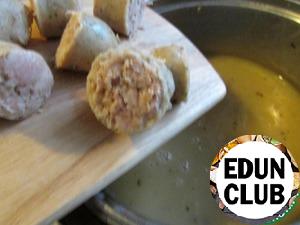 Add sliced sausages and cook until thick, about 7 minutes. Then the sour cream and heat the mass for 1-2 minutes. Sausage homemade chicken quick cooking
0.6k - 45м 4
After the horror stories in the broadcasts of "habitat" no longer any desire to buy sausage in stores. I tried different recipes, including our website (the most wonderful), but came to its most rapid and requires no special equipment for cooking. Time to beef - 40 minutes to bake in the oven for 1 hour. Another recipe from the "For those who once". Help yourself. Homemade liver-sausage meat
0.6k - - -
Who doesn't like homemade sausage, tasty and aromatic. No additives or preservatives. Prepared by your skillful hands. For Breakfast on bread with butter. On the plate with vegetables. To work with pike. Yummy!!! Try. Sausages in tomato sauce
387 - 60м -
Prepared the sausages bought in "Metro", braised in tomato podrywaczki will always please Your man! Sausage in Korean
0.7k - 30м -
It is unfortunate that in those early 90s was not such a luxury sauce "Kikkoman" (or maybe we didn't know about it), which from the simplest dish makes awesome!!! And just the usual sausages are in a different light, the color and taste! Mother's "machanka"
0.8k - 30м 3
Good day, dear cooks!!! I hasten to You today with a very hearty, tasty and colorful dish is machanka! This is our national Belarusian dish! Traditionally it is served with pancakes. Every family "machanka" are prepared in different ways. I want to share two varieties of "machanic" like my mother and how to cook favorite mother-in-law. And what have You decide for yourself!!! Invited to pancakes with the "machanka"!!! Hungry will not stay!!! Sausage roll with onion sauce
372 - 25м 4
Don't laugh at me, but when my husband asked me to make sausage rolls, I was a bit surprised, and had to improvise. It turned out so delicious that I want to share with you this simple recipe that is quick to prepare and just as quickly there :)
More recipes