Very hearty Solyanka, on the original recipe of the Moscow restaurants in the second half of the 19th century.

Ingredients for Hodgepodge "At Moscow road"

Step by step instruction of cooking Hodgepodge "At Moscow road" To start, select meat. For cooking soups need beef on sugar bone or sacrum. Chop it and fill with cold water to get rid of excess blood. After 30-40 minutes, drain off water. Re-washed meat fill with water and drop the onion with peel, to produce a clear and not cloudy broth. Cook to boiling at maximum power. When the broth is boiling, remove the formed foam. Diminish the power plate to 1/3. 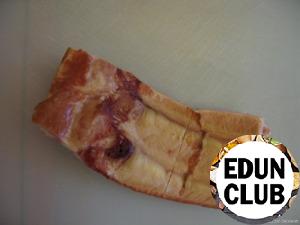 After 1.5 hours of cooking, omit spices and salt, pork ribs. Meanwhile, prepare the filling. To do this in a heated pan melt the butter, add the vegetable oil and passeruem under the cover of the chopped onion. Attached to it finely chopped tomato from which you previously removed the skin (make a small incision in the skin and pour over boiling water, the skin is easily removed with a boning knife), pepper and pickles. 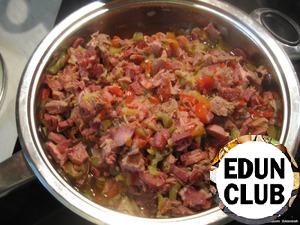 Add a little broth and 1/3 for power plate simmer for 5 minutes. Take out meat from broth, separate from bone, finely chop. Add chopped sausage and add to vegetables. Simmer for another 10 minutes. 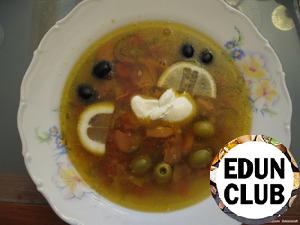 The filtered broth into another pot through a sieve. Add the mixture, and olives into the broth and proverjaem for 5 minutes. When serving season with sour cream and lemon. Solyanka chicken broth with mushrooms
78 - 60м 36
Solyanka, one of the great soups of Russian cuisine can be cooked dozens of different ways, with different sets of ingredients. However, all of these options combines fragrant sour taste with a hint of tomato and lightly smoked taste. I offer you a recipe soups with mushrooms, Portobello and shiitake mushrooms - not very traditional. This recipe on this website I found and so decided to share. This recipe was created based on the transfer of Ilya Lazerson "Principles of cooking sour soup". Orignially combination of ingredients has been expanded and some of the techniques changed. This soup is not ashamed to put on the table for guests and the leftovers reheated the next morning to improve your health :). This sour taste is very beneficial for digestion. The number of products in the prescription is written on a large pan (9 liters), as it is prepared for two families for a week. Meat Solyanka "My imagination"
154 5 - -
In the midst of Post I want to provide for Your consideration the recipe for meat Solyanka))) I, as always, break all the rules. Wanted to submit Lenten recipe, but then I thought it was boring. So show your solyanochku. I always cook it in broth from chicken Breasts. It is not greasy and tasty. Never add potatoes. It's a hodgepodge, not potato soup. Try when cooking, stick to the classics, but bring your. Hodgepodge holiday
55 - 50м -
I often cook this soup for family holidays. Meat and sausage products, I add a little bit, but the taste of the soup turns out very rich. Supplement please all! Soup-Solyanka
93 - 60м 6
Refined, not afraid of the word, a variant of the popular dishes. For the recipe a huge thank you to neighbor cook, which has repeatedly made it "work". Soup earned the warm approval of the most diverse audience, including foreign guests who downright demanded it again and again. A great option for dinner or lunch in winter, warms not worse than a glass of mulled wine. Products are not the most expensive, to cook VERY EASILY AND QUICKLY. Soup "a Humble peasant woman"
80 - 30м 4
No, I'm not confused! Initially, the soup, which we know as "Hodgepodge" called "Villager" - a rural, peasant food. When the time for lunch is too little, I am preparing this very soup based on all known halophytes. Very fast, simple and delicious! Taste?)
More recipes