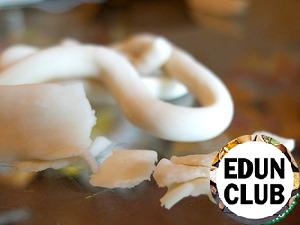 10 minutes before end of cooking will make dumplings for mimpara is a small, flat pieces of dough which are traditionally eager hands out of thin sausage. Previously the dough was rolled into a bundle of 5-6 millimeters in diameter, slightly flattened and plucked a small dumpling. Rectify salt/pepper soup base seasoned with rice vinegar and soy sauce, the remains of garlic and send dumplings to cook. Beef on the bone (I have a piece of thick edges and brisket) ~800 grams, with a cut 300-350 grams of pulp, the rest were allowed into the broth with onions, one carrot, stalks from one bunch cilantro, celery, salt, pepper, and a couple liters of water. While cooking the broth, you need to prepare all the soup ingredients and knead the dough for dumplings.
For the test I took 250-300 grams of flour with a pinch of salt, a teaspoon of vegetable oil and water in a volume sufficient to make moderately stiff dough.

Clean and chop in small dice the other ingredients previously cut the flesh one stalk of celery and a bell pepper, one onion and four medium tomatoes, three cloves of garlic and coriander leaves finely chop. Besides salt and pepper (black, red) to need soy sauce and rice vinegar (white or black). A well-heated cauldron/wok, add a little vegetable oil and quickly fry for color and taste of the meat, add the onions and half the garlic, fry. A couple of tablespoons of good tomato paste, fry Salt and pepper, with small fire, on the verge of boiling, minutes 30-40 Soup "Heart"
0.6k 3 40м -
Nutritionists recommend every day is bound to have the soups, they are very useful for the entire body, especially the stomach. Each family has their own special recipes of different soups. My family are very fond of borscht, rassolnik, kharcho, light chicken soup with homemade noodles, but this soup they just LOVE. It is very simple to prepare, but delicious. You are welcome... Bean soup with smoked brisket
358 4 25м 4
Hearty bean soup flavored with pork belly. One of the favorite soups in my family! I hope you will like! Creamy vegetable soup curry
0.6k - 45м 36
In this soup a spice and a certain spiciness of curry, turmeric and hot pepper balanced by a delicate taste and pleasant cream consistence of vegetables, such as broccoli, peppers and zucchini. Some acidity imparted to the soup with the tomatoes together with the ginger and garlic gives the soup a rich taste. Soup with seafood and rice
0.7k - - 4
Last vacation is long over, future still in the plans, and we are so looking forward to the ocean. And to refresh memories, and even slightly feel that the holiday is still around the corner, had the idea to cook this soup. Its aromas and unique taste will give the opportunity to feel the breath of these wonderful holiday moments when you try something unusual-some exotic dancers. Rice parboiled long grain amber has a unique pleasant aroma and taste that blends very well with the seafood. This variety of rice is well accentuate the spicy taste of the soup with shrimp and squid in explanation of Thai cuisine.
More recipes