Pudding in a jar By happy coincidence, I became the owner of 2 l of blood of swine. Large intestine was not, and slim for such sausage is not good, torn. So I decided to roll up in banks. Yet, you see, before winter you will live. If it was just a sausage, it would have been dead by the evening... with my Gypsies! Invited to the tasting! Suddenly someone lucky like me...

Ingredients for Pudding in a jar

Step by step instruction of cooking Pudding in a jar 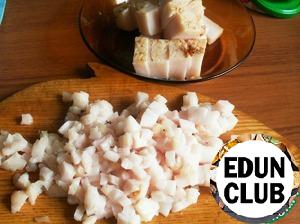 Boil the rump. A large part of the fat (350 grams) chopped coarsely. A smaller part of the small cubes. Pending fat together with blood mince. 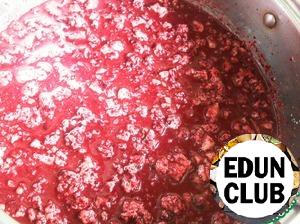 Mix the chopped bacon, twisted with blood and grits. 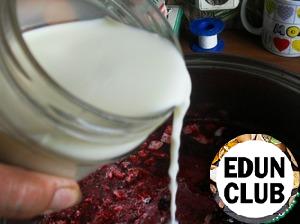 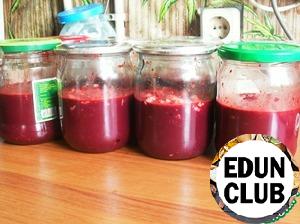 In sterile jars to pour our "bloody Mary" just above the level of the mid-banks. I overreacted, poured half. Because the process of pasteurization the blood increases. The output was incomplete, banks are content. The bottom of the pan covered with a towel and put in jars, covered with lids.
Pour water on the shoulders. From the moment of boiling to pasteurize 1h30min-1ч40 min. I all 2 hours of pasteurized, distracted... Of course, at its discretion, can add the seasoning, garlic, for example. I forgot... add Some soda. Such number blood 0.5 tsp.

Seal the cans. I rolled up and was then faced with a dilemma:to wrap or not?
What not to flip, definitely. Fat accumulates at the top and creates additional "cover".
Just in case, I wrapped...

From such a number of products I got 10 cans of 0.5 liters BUT! They turned out to be incomplete, as I wrote.
If you fill a little more, and the yield will be less. Cans 7, approximately. But it is something, in the framework of the world crisis! Stew of pork in the autoclave
457 - - -
With the advent of the autoclave in the house cooking corned beef has become much easier. Stew and pork stew with buckwheat, all very tasty and stored for a long time. Stew meat "should."
419 4 - -
Stew this doing since Soviet times (tady know how it was? get, seize more "Pro stock" and how to store? Uh-uh, no, frozen foods were not, and there was a tiny freezer in the refrigerator, which included 1 chicken... am I already so old, ugh!). So we were forced to come up with any kind of "necessity is the mother of invention!" Broke banks only 1 time - the chicken from the bones are not separated, but it is combustible tears flowed... And good luck Sausage "Tasty-useful"
382 - 90м 6
To the sausage like food product, my attitude is ambiguous. On the one hand, ate the sandwiches and fed. On the other hand - what to cram manufacturers, is unknown. One solution is to cook the sausage... by myself. With delicious, healthy, unusual, and for the future. It can be stored in the freezer before use and bake in the oven for 20-30 minutes at 200*C. Homemade stew in the sleeve
0.5k - 190м 8
I suggest you try my version of a homemade stew - in the sleeve for baking. Nothing to cook with, your participation in the preparation is 5 minutes. And then it will do everything for you oven. Kept this stew for up to 4 days in the refrigerator. Want to conserve - please. It really goes well with pasta, boiled potatoes. Try it!) Canned fish
334 - 240м -
Want to suggest a recipe to prepare fish for the winter. The recipe I use for several years, canned food in stores do not buy, because soups and soup cook their food. Fat false-smoked
0.9k 4 50м -
A very suitable recipe for those who have no smokehouse.