Dish of Turkish cuisine and is very popular among the local population. Soup of offal, namely, from the head lamb crop (stomach), tongue, hooves. The combination of ingredients changes frequently in terms of home cooking, but the head (kelle) is a mandatory component. He is so rich that often it is offered as a main dish for dinner.

Heads to put in the pressure cooker and pour water to cover completely. Close and cook for 30 minutes. At the same time separately in a pot pour water to the crop (stomach) and boil the water. Drain the water and combine the shotgun with the heads and cook further, in the pressure cooker all together for about 1.5 hours. Readiness is determined by the fact that the meat separates from the bones easily without effort, almost by itself.

Remove the head and bleed from the broth and slightly cooled to separate the meat from the bones, remove the brain, cut all the cubes. Also cut and crop (stomach).

Strain the broth through a fine sieve, so as not to leave small bones, disconnected from the heads, and pour back into the pressure cooker. Put the sliced meat, and a shotgun.

Add chopped garlic, salt, pepper. If necessary, add a little water to the consistency wasn't too thick. All again to boil.

Serve the soup, tucking a few drops of lemon. Vegetable rice soup with corn
332 - 40м 3
Spicy vegetable soup with red rice, vegetables and corn. The Beginning Of Lent. Diversity is our Lenten menu. Today I offer you soup, we will replace the fish and meat soups at this time. Useful, bright, delicious! 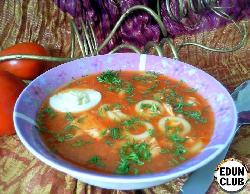 Soup "Turkish"
382 - 45м 6
I suspect that the Turkey, this soup has very little, but it was under that name he met me on the Internet. Attracted a minimum of product and speed of preparation. But it turned out that its advantages can be more attributed bright taste and rich aroma. Mushroom soup with barley and bacon "Mishin soup"
426 - - -
For the contest "Journey to ancient recipes". This delicious and hearty soup was prepared by my great-grandmother (grandmother of my dad) Vasilisa Petrovna, who lived in the village of Konstantinovo. Soup with meatballs
1k 3 40м 7
My daughter does not like soups with zazharkoy, and her husband without her. So we have to cheat to please both))) Pea soup canadian
0.7k - 140м 8
Pea soup is known for a very long time. So, mention of it is contained in the "Birds" of Aristophanes. The Greeks and Romans grew peas about 500 and 400 years BC In that era, the merchants in the streets of Athens were selling hot pea soup. In each country pea soup is cooked a little differently. Write the recipe for French canadian pea soup. This recipe is very popular in Quebec. Use only yellow peas. Soup with cheese dumplings
1.1k 5 50м -
Husband was given an unexpected request: "make some soup with dumplings". I didn't want to make them from simple "dumpling" dough. Came up with this option.
More recipes