Pickled peppers with zucchini and carrots My husband loves peppers and seeing the store usual local peppers at a very ridiculous price, brought me 10 pounds, handed over and said "do what you want, but in the winter you want the jars with peppers". That's done.

Ingredients for Pickled peppers with zucchini and carrots Products are about. One approach to the plate of pepper (seeded) I had a little more than 2 kg, one big carrot and one small zucchini. All together 2.5 kg. Peppers cut so that it is easy and quick to throw in the jar, the carrots rubbed shredded, zucchini, sliced in circles (I tried slices, but not impressed), also cut up cloves of garlic, but I was a giant, if little, it is better to leave entirely. Washed greens. Prepared vegetables put aside and engaged in the marinade. For the marinade in a large pot (I have 8 liters) poured 1 liter of water, 3/4 Cup sugar and vegetable oil-3 tablespoon salt and let boil. Once the marinade to a boil, lowered it to the pepper and put the lid on. Once boiled pepper, reduce the fire twice. The peppers need to cook 4-5 minutes, no more. Our pepper is not as dense as the Bulgarian and long cooking will not survive. A minute before the end threw the carrots+zucchini+garlic and poured 3/4 Cup of vinegar. Because the process is very fast and needs attention, then take a picture failed. In hot sterilized jars thrown to the bottom of the greens (directly with twigs), leaf Lavrushka, a few peas of fragrant pepper and top with close-laid hot pepper. Immediately curled under the covers and turned over.
From 2.5 kg of vegetables were two two-liter cans under the neck. The marinade will remain, but if you take less water, the marinade will not cover the vegetables in the pan. So I decided it is better to remain. 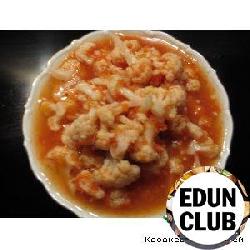 Cauliflower in the marinade
117 3 25м 12
Cauliflower marinated ideal as a cold snack with vodka. 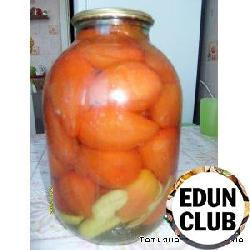 Tomatoes in sweet and sour marinade
73 - - -
I know it's premature to put such recipes, but got a bottle, so yummy mmmmmm... Always goes on "CHEERS", close and ask for the recipe. Salad "Eggplant with onion"
78 - - -
Under the feast but vodka, potatoes with herring. Tasty, tender, but with ostrinskoe winter, We'll do blue. Highly recommend!!! 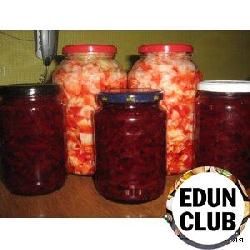 Pickled vegetables for future use-for appetizer and soup
125 3 - -
Cabbage and beets in one, but in different banks. I have little time for preparation, and friends love to share the harvest... And that products are not lost, they are in my small apartment no place to store, I quickly try to hide them in jars. I offer pickled vegetables for all occasions. Can these vegetables to prepare a variety of salads, soup, borscht, Sokolniki... I use the fill from this recipe Barberries pickled
80 - - -
Fans of the barberry is dedicated. Aromatic, sour and spicy berries is ideal for meat dishes. Cherry marinated
95 5 - -
A great snack, addition to salads. In General, very tasty and a must for your autumn and winter salads and decorations! 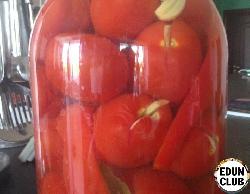 Tomatoes with garlic
93 - - -
If you like garlic and spicy at all. These tomatoes will be the highlight of your table, my guests are still asking for the recipe.

Pickled garlic arrows
91 5 50м -
In the garden a lot of garlic arrows are thrown, so felt sorry for them. But one woman was advised to add salt, but I tasted the marinade was yummy. You can add to various dishes, or as a separate dish. Try girls, I think you'll like it!
More recipes