Preparation for the winter "A La in Odessa" The recipe originated on many issues dear chefs. Offer a recipe for winter harvesting peppers for prescription " Pepper-snack, "A La in Odessa" ", which I laid out earlier. Preparing the peppers during the winter you will only have to add a minimum of ingredients and effort and delicious snack you have on the table. Maybe someone will be useful this is not tricky, but very useful piece. Let's start...

Ingredients for Preparation for the winter "A La in Odessa" My pepper and put it on a baking pan with parchment paper. The peppers I bought are very large and fleshy. Three kg of peppers was only 13. Sent bake them in the oven at a temperature of 180 degrees until cooked. I have it took 1 hour. When the pepper is baked, put it in a bowl and cover with a lid for 20 minutes. It is easier to clean. Prepare containers for freezing. I have a small volume of about 600 ml. Put on containers packages Still, we need spices. Granulated garlic (if you freeze fresh food, it will turn blue), oregano and dried dill. Layer by layer, fold the pepper in a container. Put the inner side up. So it is better to soak the flavors. Sprinkle each row with a mixture of spices. 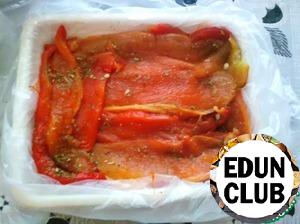 Fill the container from the calculation of the portions that you will need in the future. 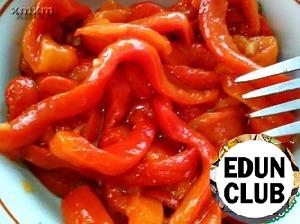 In winter, defrost, cut into strips and add only butter and salt with soy sauce. The food is ready.
Bon appetit. Thank you. Chocolate butterflies
67 - 40м -
Delicious chocolate butterfly Farfalle made with your own hands, will delight you and surprise the family! Boil them for 2-3 min. do Not stick together, do not boil soft, do not lose their shape. Serve them with chocolate, custard, condensed milk, butter, sugar, syrup, jam, honey - to your taste... If you don't want to boil Farfalle all, they can be dried on the table, remove the bag and put it in the freezer. If you need to get to a boil, not defrosting... I'm very happy with them!!! Lemon granite
99 - 480м 4
Granita is a traditional Sicilian dish. There are disputes that it is the drink or dessert. Granite resembles a snowcone, but, of course, because of its texture, is more related to the drinks. Frozen dill
117 5 15м -
Dill I'm doing for the winter flavored ice cubes. America will not open, but maybe someone such preform useful for dill now is the season. Strudel with chocolate-hazelnut filling
135 - 40м 4
On the website many strudels, but with chocolate I found only one, and he's not like mine, so I add, suddenly someone will like it. And strudel is a wonderful dish suitable for freezing and subsequent rapid cooking, not really frost. Meat basket with vegetables "Gifts of autumn"
71 - 65м 2
Autumn is a great opportunity to freeze and to prepare for the future a variety of vegetables. One of the options with meat and vegetables. Puree for the little ones
70 - 50м 8
When the house appears a baby, worries mommy very much, and with the introduction of feeding them becomes even more. You need to cook a little something delicious, but to save any unnecessary portions, after eaten will be quite a bit? Come to the aid freeze. I have a third child, and this method of storage of vegetable and meat purees learned recently. It is very convenient - cooked, frozen and a stock of food for the baby is always at hand. Mix for scrambled eggs
78 - - -
I want to share the recipe of frozen mixture for the omelet. This mixture bought for the first time last winter in the SUBWAY. And since then she had constantly, until the summer. Because it's nice to get up in the morning and cook myself some eggs or an omelet with fresh (even defrosted) vegetables. So I decided to season the vegetables to cook this stuff myself. Moreover, all the vegetables available.
More recipes