Pea porridge with buckwheat and bacon Pea porridge with buckwheat, fried onions and bacon or Estonian - Herne-tatrapuder röstsibulaga. It's not quite a traditional Estonian meal for buckwheat, which in the traditional cuisine are present in very small amount. But at the same time this dish is, and in Estonia it is known and prepared. The base of the course is porridge with milk their peas, buckwheat. The dish is very hearty, so it is suitable even for very hungry family members.

Ingredients for Pea porridge with buckwheat and bacon 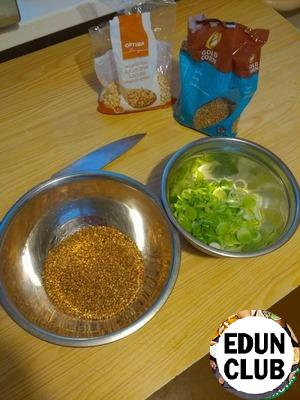 Primary processing.
Rinse the peas (no need to soak, but this increases the cooking time)
Put it to boil. Bring to the boil and reduce the temperature to minimum (Forget about it for 45 minutes)
Prikalivaet buckwheat. (Due to the calcination buckwheat is crisp and with a pleasant taste)
Cut into slices leeks.
Cut thin strips of bacon.

Check the peas, he should be able soft.
Add salt.
Fall asleep buckwheat and cook at a low temperature until the liquid evaporates. 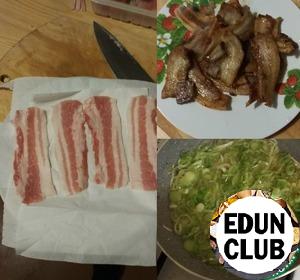 While the porridge is cooking, prepare the onions and bacon.
The bacon should get crispy, I cook it in the microwave, but it is possible and in the pan and in the oven.
The principle is simple: on a plate spread 2-3 wipes, they put the bacon so that the slices do not touch, cover with another cloth to protect microwave against splashes of fat (do not press the cloth, just cover it bacon).
Cooking time 3-4 minutes, depending on the power of your microwave.

Leek and saute in the pan for 2-3 minutes

When applying for porridge put onion and a few slices of bacon. 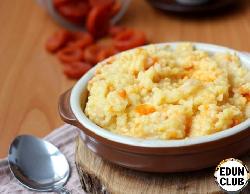 Millet porridge with pear and dried apricots
117 - - 2
We love millet porridge, but, as pearl barley, cooked not so often due to the fact that it takes time, but with the slow cooker this item has disappeared and now only thinking about how (Kashi) to diversify. Here is one of them. Polenta with tomatoes
80 - 30м 6
Porridge is quite delicious, quick and easy to prepare, besides satisfying. Ordinary ingredients, but extraordinary flavor. Millet porridge with mushrooms and cheese
94 - 25м 4
Not the usual cooking meals, but very tasty result!! Mushrooms don't fry, and it gives the porridge a new taste! I offer you, my dear, to try this option millet porridge! It turns out tender, moderately spicy and savory flavor. Come, taste and learn! 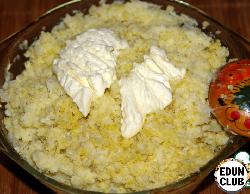 Millet porridge "Dandelion"
106 - 60м 3
Porridge is prepared with ease. It turns out in a crisp, but not dry by heat treatment in the oven, flavored through onions, of air due to the beaten eggs and filling due to the potatoes. This porridge can be served as a separate dish or used as garnish. Economical and simple option for a variety of everyday dishes. This recipe was posted on the website in the 2009 user Helenchik called "Millet porridge "Dandelion" and is illustrated with me in the framework of "Coloring". Porridge from Gorodets
173 - 40м 4
For the first time this mess tried in the city of Gorodets, Nizhny Novgorod oblast. Porridge rice aquatics Mix parboiled long grain and wild, buckwheat and Pollock. A mixed mess very well with fish products are available to pocket, no need to run around and look for the ingredients, and, most importantly, it turns out very tasty, useful, children enjoy eating this mess Barley porridge with vegetables "Kaleidoscope"
93 - 60м 3
Looked at all the variations of cooking barley and took that risk to put your. Why "kaleidoscope"? Because it turns out colorfully. And like a child. Simple, tasty, hearty and, most importantly, useful. The first time I cooked (albeit with a tomato and red pepper), my husband said that he only eats barley in the soup. However, a bowl of porridge eaten and didn't blink.
More recipes