Chicken with shrimp and potatoes A rather unexpected combination of ingredients, but the taste is quite traditional and very tender. I bet no one will guess the third component of the stuffing. The skin condition will have to Tinker and to gently separate and to get a crispy crust. But the result deserves it - very tasty.

Ingredients for Chicken with shrimp and potatoes

Step by step instruction of cooking Chicken with shrimp and potatoes Here they are - our simple ingredients. Honey and vegetable oil, however, is on the bench But with chicken you will have some trouble. Make a longitudinal incision across the breast and gently remove the skin. The most extreme of the bones in the legs and wings are left in the form of "tubes", then you can pretty fill with stuffing.

My inexperience it happened only one leg and one wing 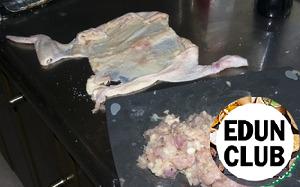 Cut the meat from the bones - so to get about the same meat as the shrimp. Finely chop with a knife and then another mash potatoes, salt, pepper, add sugar to taste.

The battlefield was for me, but no casualties has not done. 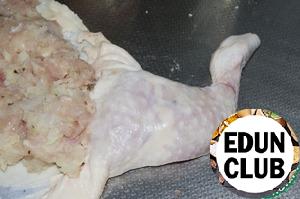 Fill them with stuffing "pockets" 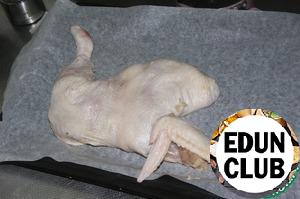 Due to the fact that I have got only one leg and one wing, turned out to not like head-crab from Half-Life. Ideally, you should get a very nice "chicken" Then removed, daubed with honey, and again in the oven for 10 minutes. The bottom of the pan put a wire rack (or you can use a large colander), put on her our "chicken" and pour vegetable oil, heated to 200 degrees. Several times, until Golden brown. 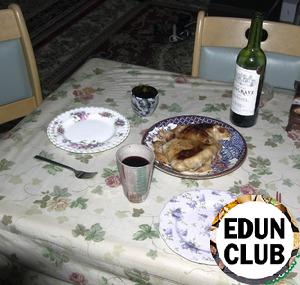 Everything is ready - Bon appetit! Roulade of duck
115 - - -
In this roll you need to "make friends" duck, chicken and an excellent result will not keep itself waiting. Chicken baked with pears sauce
229 - - -
Extremely tender meat of a whole chicken, with a flavorful crust with soya-mustard sauce with balsamic vinegar! And what tasty pears! Can't say the variety of pears, but that worked well in this dish retain their shape, juiciness and taste! Chicken stuffed with beans at home
82 - - -
Delicious dish – soft, juicy baked chicken with a bean side dish from TM Frau Martha, who cooked with the chicken inside. Help yourself! Chicken stuffed with buckwheat
137 - - -
Very tasty, juicy chicken.. make this for every holiday and just to please family and friends.. Stuffed chicken drumsticks
157 - - -
The dish is simple and delicious... billet lower legs for stuffing I always do for the future, thawed and ready! Stuffing stuffing can be served as a side dish. Chicken stuffed with parsley, rye dough "Good Dad"
133 - 110м 6
Sometimes our dad was preparing us for the weekend. I remember a child's feeling when I Wake up in the morning and from the kitchen heard the amazing, the unusual, the delicious smell of some new dishes, recipes of which he often invented himself. So. Share with you the recipe that he learned from the chef in a Moscow restaurant.