Ossetian pies is a traditional dish that met dear guests in Ossetia. Usually these three cakes stacked on top of each other. Traditional stuffing with cheese and maybe cheese, greens, meat, beans. On the website there are recipes Ossetian pies, like my slightly different. Very good and easy to work dough! Now baking just for the evening table. When you expect guests usually do all three with different fillings. Today, eating cheese pies. :) Start cooking! 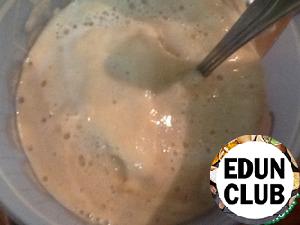 In lukewarm water, add yeast and sugar and mix up. Wait literally 5-7 minutes so the yeast have earned. Will appear this cap. Butter TM "milieu" melt some in the microwave. If you make the dough yourself, you have the flour with salt pour into a basin, make a funnel to pour it in yogurt, water with yeast, add our oil TM "milieu" and make dough. Leave for an hour to rise.
Helps me, my helper bread. I just put on the regime of the dough, poured the liquid ingredients first, then poured dry. And then she handled herself. Turn over, roll out again, or mash, doing ball again the cake in the middle is necessarily a hole for steam output... Set in oven heated to 200 degrees and bake until Golden test. Take out, grease is still hot pie a piece of butter "milieu". Put all three baked pie at each other - it turns out tasty tower. Cut and eat with tea, milk or compote. And most importantly having fun! Mom's Apple pie
97 - 30м 10
In the cold November evenings you want something warm, fragrant, delicious. ... Out of childhood. Offer a recipe simple Apple pie, which in childhood is often spoiled my mom. Crispy pie with carrots
96 - - 8
Not found on the website of almost any recipe pies with carrots. Don't you love carrots as much as me?! Since childhood, I love pies with such toppings! I think, and kids love them very much. Let's get cracking together?! Lemon tart from Menton
377 - 80м 8
In the French town of Menton is held every year a Grand festival of lemons, which is accompanied by fairs, costumed processions, concerts and a fire show. Naturally, lemon cakes plays an important role in this celebration of life. Cooks compete to see who will bake the most delicious lemon pie. Here is one of such cakes and we're going to bake. All lovers of key lime pie dedicated!

Cake
97 - 50м -
In College this pie we girls with sokursnitsa baked often. Quick , tasty, not difficult. Cottage cheese-Apple pie with caramel
124 - 60м -
The delicate cream base, flavorful apples and a crunchy coconut caramel! It is very tasty! And still very easy. And cheese prepared with starter culture from Orsika also useful! Bulgarian pie with cottage cheese and apples
109 - 70м 10
A cake flavored with cream cheese and apples. Very easy to prepare, does not need any special equipment, all the ingredients are available, and the result is heartfelt, homey and very cozy. For the recipe thank you Nataliya. Pie "Lemon"
138 - 60м -
Here's a sand cake is a very fragrant and delicious. If the oven with vegetable margarine, you can bake in the post. The dough is very crumbly and delicate. The filling, in principle, you can do both.
More recipes