The birthplace of the vegetarian dishes - the Turkish province of Zonguldak. Is used instead of rice, bulgur, and meat instead of minced walnut. Nut it is not necessary to chop very finely, just slice or grate. During cooking, it softens and becomes as soft and bulgur. Special flavor gives this dish the addition of hot pepper, lemon juice and milk-and-flour soup pmac, which can be used as a sauce.

Ingredients for Stuffed peppers with walnuts

Step by step instruction of cooking Stuffed peppers with walnuts Walnut crumble so that it was like grits. Cut onion finely and fry in solodke with a small Cup of sunflower oil. After that add half tablespoon of tomato paste and stir. To the resulting fried add bulgur and half a Cup of water. Continue to heat and give bulgur to swell, adding water. Then add salt to taste, thyme, black pepper and parsley, then mix with walnuts and a little warm.
Then the actual stuffing. For this stuff the peppers small size varieties of dolma. In the summer, to buy them easy. In the winter they only sell in Auchan. Close them on top of cut stalks, to prevent water washed away their content. Pour water into the pan, slightly not reaching the peppers to the top. Make sure that none of the tip is not covered with water, and all the peppers were immersed in water at 90 percent. Then bring the water to a boil and simmer 40 minutes. After cooking, drain the water, remove the stem, grease the top with mayonnaise and put rings of chili peppers. While food can be moistened with lemon juice. As a sauce can be cooked milk-flour soup Pmac. Dilute six tablespoons of flour in two cups of water. Then add another Cup of boiled salted water. and begin to heat to boiling. The flour will thicken, and it should stir to dissolve lumps. At the same time should boil half a liter of milk and add etou brew. Stir to achieve a homogeneous mass. Then you need to add colb to taste and mint in the form of ground spices. Let cook a little more.
You can eat it separately or pour over our peppers. You should know that this soup is only good in the freshly prepared form. If stored in the refrigerator, and further heating it thickens and becomes tasteless. Bell pepper stuffed with vegetables
128 - 60м 5
This recipe helps You to cook a great dish for lovers of vegetables with low material costs and a portion of vitamins. The highlight of the pepper in this recipe is mouth-watering vegetable appetizer with a spicy sauce. Peppers stuffed with vegetables can be as a separate dish, and garnish to main dishes of meat, fish, poultry. It can be prepared for the festive table, and for a family dinner. Watch the video and cook along with me this wonderful stuffed peppers. Stuffed peppers "the Kid"
102 - 60м 4
This pepper had prepared my sister for the holiday table. And I liked it... Hope You like it too! 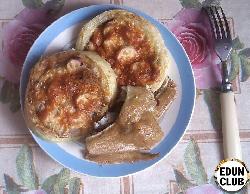 Zucchini "From aunt Ghali"
121 - 60м 4
No claim to originality, recipe heard at work from a colleague, she read about it in some culinary magazine. I used to do everything exactly according to the recipe, so I offer my variation of stuffing zucchini. My husband and child, this dish had very congenial. I hope enjoy you! 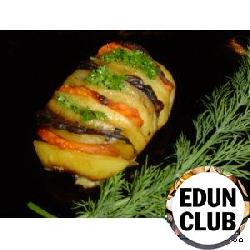 Peppers stuffed with lobio
127 - 120м 4
We all know that lobio - a hearty and delicious dish that many will have to taste! And most importantly, they can be eaten in the post. And in combination with baked pepper lobio acquires a wonderful taste that will certainly appreciate relatives and friends.
More recipes