First recipe griffinov I posted quite a long time in your blog, on other food sites and later on the Pillsbury website. If I'm not mistaken, this was the first recipe in the Russian language that became so popular that everywhere you publish the recipe of griffinov. Taking into account already existing experience and for those who want to cook craftily with stuffing I decided to share this recipe and to give you some useful recommendations. In this case, I formed raffini of the two spirals. First, on the bottom of the form, completely closing it, put a single spiral, then the second. When screwing the second spiral finger forming a void, it turns out the hole for the filling. You can certainly use a single spiral, but this option is more convenient and by the bottom we still have one "intact" and the filling is delicious in the arms of the test. As in the first and in the second case, I retreated a little from the recipe of the original, forgive me, his Creator)) the Result I was pleased and flair did not disappoint!

Ingredients for Craftily with chocolate filling

Step by step instruction of cooking Craftily with chocolate filling 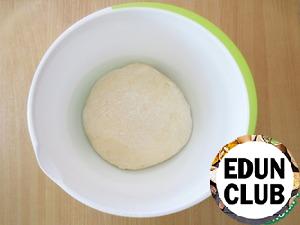 In warm water razvesti yeast, add 1 tbsp sugar and 1 tbsp flour. Leave for 15 minutes.
The egg with the remaining sugar lightly whisk to combine with the yeast mixture. Gradually add the sifted flour, vanilla sugar, salt and diced butter at room temperature
Knead the dough for 10 minutes, cover with a towel and leave in a warm place for 1 hour. Table sprinkle with flour, put the dough, punch down and divide it into 5 equal parts. Each portion very thinly roll out the reservoir. In everything was done by hand, although you can use the machine for rolling dough 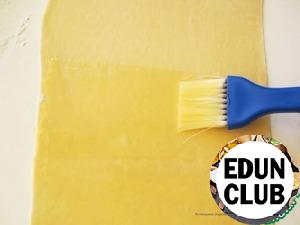 Lubricate the surface of the sheet with butter 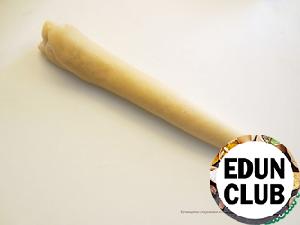 Then roll the sheet into a roll and pulling the roll to roll it. It will be longer than 20 cm 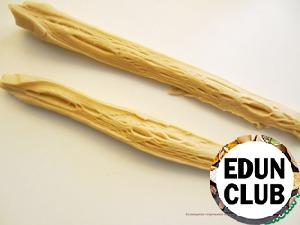 The roll is cut along the entire length Each puff pastry strip to be cut into 2 parts.
Molds grease with oil and lay them alternately in a spiral. The first one, closing the bottom of the form and then the second, leaving a hole for stuffing.
You can certainly use one long strip, but so much easier and the circles of the helix lie flat. In the middle put 1 tsp ( or slightly more as you like) chocolate spread. 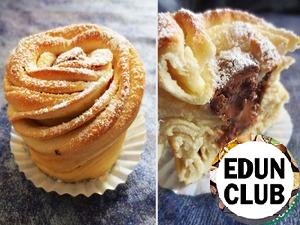 Craftily leave to stand for 15 minutes. And then bake in a preheated 200 degree oven for 20-25 minutes. Lenten bread with barley
191 - 140м -
Today's flight of fancy led me to making such mouthwatering here, very useful rolls. An airy, light brioche are very harmonious fit to many dishes, and sunflower seeds and crunched in your mouth. To me these buns very much. For a long time not stale. Try, help yourself, please share your opinion. English Easter buns "Cross"
106 - 180м 6
These delicate sweet buns (Hot cross buns) are preparing for Easter in England and America. Sometimes they add chocolate chips or nuts. In this recipe they are baked with the addition of fresh Apple, which makes them very light and airy. 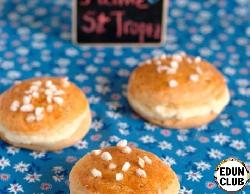 Mini tarts "Tropezien"
156 - - -
Today I want to share with you a very tasty recipe. This is a French classic - the tarte option "Tropezien" (Tropezienne). I had this tart on the côte d'azur. His name was coined by actress Brigitte Bardot, which was filmed in Saint-Tropez (Saint-Tropez) in 1955. She loved tart by local pastry chef, so she offered him the name in honor of this city. The base of this tart - brioche + oil-custard. But I want to offer a variation of this classic recipe. Muffin "Minute"
174 5 25м -
Muffins for all occasions: instead of bread, tea, a snack, etc. And most importantly - are made very quickly and from the minimum set of products. Orange rolls
105 - 40м 12
Soft, tender, fragrant orange rolls, baked from the night of the test. This recipe is from the "whip up" with reservations: if the evening to put the dough in the output, you can treat your family with fresh warm rolls for Breakfast. Recipe taken from the Internet. PS Sorry for the photo quality and lighting, but I live in a student residence where there is no possibility beautifully to remove dishes) Buns in butter test
110 - - -
Dear cooks, I want to share with you my favorite recipe creamy dough. My mom (she is now 86 years old) had always prepared the dough for this recipe and the buns were formed that way. She used me and my family indulged such cakes, and now for many years I indulge her and your family, and your friends. Maybe for you this method of molding is not new, but maybe someone didn't know. I'd be happy to share with them. The pastry is suitable for sweet and savoury baking. Behaves well in the oven and in the pan. Come on in and get. Muffins with plums
184 - - 8
Want to offer a recipe for tender muffins with plums. The Foundation took the recipe of Marina Zabrodina, thank you very much. The buns turned out fragrant, delicious with walnut notes. Stuffing can take any - apricots, cherries, apples, peaches, nectarines. Such delicious pastries served with tea, coffee or a glass of cold milk. These scones are a perfect mix of juicy filling and soft dough.
More recipes