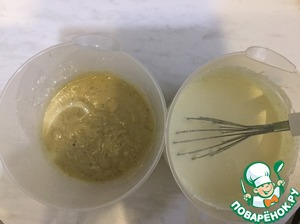 Now three make banana puree (blender) and will have to add it to the cheese-sour cream-Yai Chou mixture. 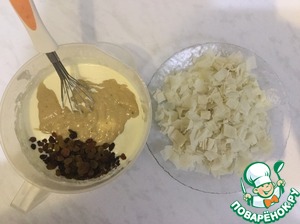 Also add raisins, nutmeg, pineapple syrup, and phyllo dough, which is cut into small pieces. Before that, I made a dish with phyllo dough, which is pre-torn with the hands, this time I decided to cut first into long strips, and then they are already crosswise into little squares (the option I liked most importantly - a large and sharp knife!). After this "fluffed" squares with your hands, and they can easily become a lush mass. Now "fluffy" throw the dough in the cheese mass and mix a little. 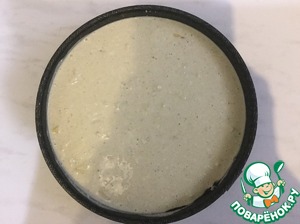 The resulting mixture is then poured into the form and add a banana cut into pieces, did not leave it on top, decided to "drown". I bake in the convection oven: on average the bars, 15 minutes of cooking on low speed fan on at 180 degrees, then put the average rate has increased the temperature to 205 degrees and bake another 25 minutes...