In Orthodox monasteries on mount Athos, Greece the monks on Saturday and Sunday allowed to eat during lent seafood, as the Greek Charter equates them to marine plants. In the adopted by the Russian Orthodox Church the liturgical Constitution, the consumption of seafood is not prohibited. However, most pastors agree that "marine reptiles" do not eat every day during lent. For variety, Lenten table offer you are allowed days to cook porridge with squid.

Ingredients for Barley porridge with squid

Step by step instruction of cooking Barley porridge with squid Pearl barley boiled on a slow fire until tender. I have a barley bag for cooking. While cooking grits to cook the remaining ingredients.
Onion cut into half rings, carrot grate on a coarse grater, fry in vegetable oil. Carcass squid scalded with boiling water, peel, cut into strips and fry in oil for 3 minutes (I fried in another pan, separately from the vegetables). Then the squid, then add the vegetables, soy sauce, spices, and fry everything together for another minute. 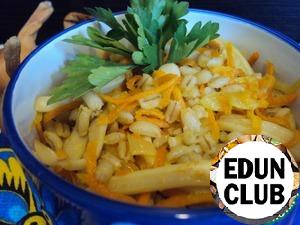 Millet cakes with carrots and peaches
98 - 20м 2
Millet cakes with carrots and peaches in Russian. Tabbouleh — salad, appetizer. The main ingredients of which is bulgur and finely chopped parsley. Also used mint, tomatoes, green onions, other herbs and spices. Tabbouleh dressed with lemon juice with olive oil. The birthplace of this dish Lebanon and Syria. Sometimes instead of bulghur can use couscous. My recipe, of course, very different from the traditional. So he "Russian", namely, with the grain. This native Russian barley is not less healthy and tasty than the imported bulgur and couscous. Interested? Then start cooking! My pilaf
118 4 45м 12
Did pilaf in many recipes where something wasn't right. Something changing, made your prescription. Do not be surprised if someone makes a pilaf as well. Buckwheat in a pan with fish balls
78 - 30м 1
In a frying pan buckwheat is cooked much faster than in a pot. Offer to prepare a hearty and healthy dinner in a pan of buckwheat with the addition of fish balls. The rice mariti
91 - 30м 2
I will not say categorically, but, in my opinion, the side dishes of rice are most common in Post anyway, in my family. So, it would seem that rice has prepared and invented all that was possible. Nevertheless, I dare to offer you quick cooking, simple and delicious recipe with the accent of Chinese cuisine which is so popular in the Primorsky Krai, in the far East. Couscous with vegetables
67 - 20м -
A quick and delicious lunch or dinner in 20 minutes. Hearty, juicy and easy dish for vegetable or vegetarian table. Or as a great side dish to meat. Unlike other grains, couscous cooks in just 5 minutes. It really helps when you need to quickly prepare lunch or dinner.