Ingredients for Bread in five minutes

Step by step instruction of cooking Bread in five minutes 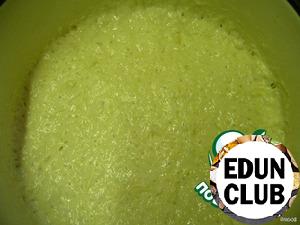 The dough is prepared according to the same principle as "the American sandwich"[url=h ttp://www.povarenok. ru/recipes/show/1386 9/]here[url]
Here is the dough after the daily ripening in the fridge, thickened, and bubbly. 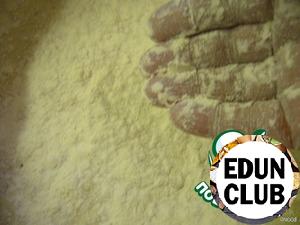 Pour flour in bowl, dip hands in flour, sprinkle flour surface of dough and tear off a piece of him, crushing at the bottom of the dough, form a ball, I took half, though it turned basetime, it was necessary to divide the dough into two baguettes, they would be more careful 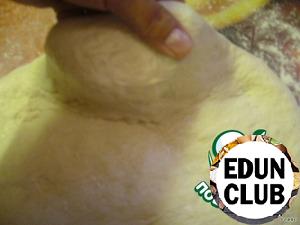 On the table, sprinkle some flour, gently at first from the dough form a ball, which tie the hands lightly on the table in a rectangle. Now the rectangle shape baguette: the top third is folded around to the middle. 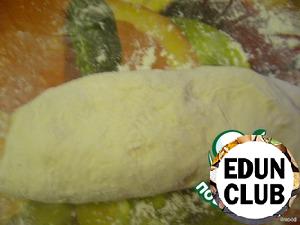 The bottom third of the dough put on top, covering the top third (the dough flatten it to breathing), the edge of his palm presses along the seam (to keep the shape of the product). The cutting Board is not sparing sprinkle semolina ( or cornmeal) to prevent dough from sticking to the Board. Seam side down put the baguette on the Board for 40-50 minutes for proofing (cover with towel). 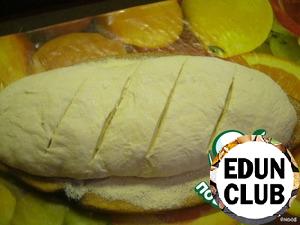 Twenty minutes before baking sprinkle the baguette with flour and make a knife with a nail file cuts (depth 1-1. 5 cm), I did them later, before landing in the oven (the kids got distracted), so my baguette lost form. While rasstavatsya baguette, preheat the oven to 200-220 gr C, in which the warming pan, which will bake a baguette.http://www.pov arenok.ru/
With cutting Board and baguette easily manke moved down on the hot baking sheet (the dough is on the bottom right will seize and will not stick to the dry pan) I put it on a diagonal because he was not a baguette, and magetism and put it in the oven the top, the bottom of the hot pan splashed boiling water (for steam) and leave to bake for (recipe 25 minutes but in my oven sat for 40 minutes). Turned out to be so "crocodile", but the taste is not affected. Put the bread to cool on a lattice, but the curiosity took over, it created this wonderful bread a breakdown 20 minutes after baking. Corn bread
96 - 80м 4
Very tasty, easy to prepare and quick to eating... was Looking for, but this recipe is not found. This is my first recipe on the Pillsbury, do not judge strictly... Rustic potato bread
88 - - -
Potato homemade bread has many advantages. He's not stale, it turns out soft, delicious and hearty. This bread will surprise you with its originality of flavors:a subtle blend of wheat, potato and rye. Try it! Rye bread home alive
135 - - -
Love pure rye bread. Been looking for a recipe without adding wheat flour. In fact, this bread is called "black". So says my grandma. However, the Internet is mostly posted bread recipes that use rye flour with wheat. Finally found the recipe of the "living" rye bread alum, i.e. the yeast from the brew. In this recipe in the test has fully completed the maturation of the enzymes, which our ancestors attached great importance. Many of the dishes were based on fermentation (the brew, Solodukha, etc.), which was endowed with miraculous power, giving health, vigor, good health. This bread has a long shelf life (7 to 10 days - free) and becomes every day more delicious, because enzymatic processes make it "alive". Rye-wheat bread
125 - 150м -
Delicious bread with a light crumb and a slightly crispy crust. This is my first rye bread. Garlic bread
78 4 - -
It so happened that for today's Breakfast we do not have bread :-[ we Quickly ran through the recipes and 9 PM downloaded all HP. After 2 hours, my men were indignant that I'm over them, hungry, bullied. The smells were... beyond words... And now with Breakfast not long mudila: bread goes well with vegetables and various savory spreads. Try it! Cheese corn bread with Basil
103 - 60м 8
What a handsome man!!! All who see this picture, asking me to bake it. This is a wonderful discovery for all lovers of baking corn and for those who adhere to a gluten-free diet. I love the corn and baked it many times. Especially delicious pie warm. But if, after baking, you didn't just eat, I will tell you how to warm up and the taste and appearance it will be as freshly baked! Cooking? This is a picture from my old collection, all that was left of it.. My favorite. When photographed, all the pictures turned out, in my opinion, perfect! Bread I great posed. Urban bun
125 - - -
The French loaf. When I was little, near our house was a bakery where, if at 8 am to queue, you could buy a hot fragrant bread town (a kind of mini-loaves, very soft inside and crispy outside), around 1998, the bakery was closed... But last winter my husband gave me a bread machine and it came with a collection of recipes, one of the first I tried out the recipe "Soaps", and it was exactly the taste, my joy knew no bounds. I know there are similar recipes, but this I have always.
More recipes