I think many people know couscous! This recipe taught me by my beloved husband.. the original must be the chickpeas and pumpkin.. but very tasty.. I think you'll like... Before you cook the gravy, the Arabs call it "Marak" we need to put to cook the cous cous... to do this, pour the cous cous in a not too deep bowl and take as much water as you have couscous... that is, if 1 Cup of couscous, one Cup of water... I have one small Cup of... pour the water into the cous cous portions small and exercise your hands to avoid lumps.. The cous cous will increase Bring to a boil for 20 minutes on high heat... I have this cookware. At this time prepare the gravy, that is "Marak" as it is called by the Arabs... it will roast the meat to an angry crust, you can cut the meat slices but the Arabs do not cut into pieces, cook in large chunks. add onions and garlic and fry until soft onions and garlic 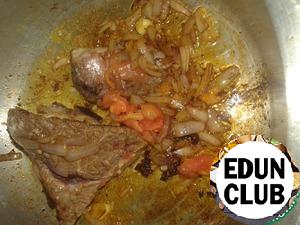 Then peel tomatoes and add to the meat.. I was left with tiny tomatoes I had to add it, as there was no time to go to market Further dilute 1 tbsp of tomato in 1 Cup water and pour all this.. and add more water 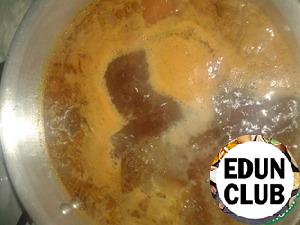 When it boils, put salt to taste, black pepper and cumin (you can add a bunch of cilantro, fragrant) 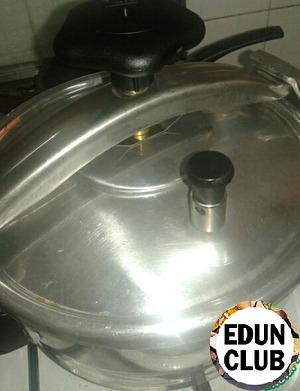 And cover with a lid and cook meat until soft-I cooked in the pressure cooker.. because we needed faster, and the meat of a camel is slow... After 20 minutes the cous cous, put in the same dishes where it was ground, after the cous cous has cooled slightly add the vegetable oil to about 1 tbsp, salt to taste and water a little more than half Cup and again, peritonei hands, so as not to form lumps, and return it again in the pot and cook for another 20 min. Next, put in a bowl the cous cous slide, spread on top the meat and the sides decorate with vegetables. the soup is served in separate dishes, which is then poured over the cous cous while eating. Rice "cupcakes"
98 - - 6
These cute quiches I made for my family. Stuffing can take any, both meat and fish. Sauce it also can be very different. I took home tomato and sour cream with the mustard and lemon juice. Chess Board with rice cream and mushroom sauce
110 - 30м 2
The post continues and I come to you today with an easy dish that can be a light dinner. Delicate fish are even more delicate and airy cloud of rice with coconut flavor. Fast with taste and pleasure. Khichdi with celery and spinach
68 - 50м -
Khichdi is a traditional Ayurvedic diet dish, which is based on rice and mung beans (mung dal). It belongs to the category of cleansing foods. It's a perfectly balanced dish and from the standpoint of modern dietetics, and from the perspective of Ayurveda. It contains an optimal composition of proteins, fats and carbohydrates, fiber, many useful trace elements, balances all three doshas and is very nutritious. And most importantly, it's delicious, nutritious and easy to digest, despite the fact that the composition of rice and beans. Buckwheat with carrots and feta
107 - 20м 2
Free interpretation of the recipe of Julia Vysotskaya from the transfer "Eaten at home" of yesteryear. Buckwheat with onions, carrots and beets very much, and cooking with grits from the cooking bags shorten cooking time with the change of technology. Paella on the beer with salmon and squid
73 - 60м 3
Paella is deservedly a delicious and easy Spanish dish. "Many fans of this dish was asked the question: is there a recipe for cooking a proper paella? What is the recipe to consider this - with vegetables, seafood, fish or meat? And came to the conclusion that no single recipe exists. But there are ingredients without which a paella will never be the paella is the rice and the saffron, the rest is a matter of taste"-so says about this dish is the author of D. Nesterova in his book. Happy to offer a recipe. Warm salad with crab meat
111 - 35м 3
Rice crispies, juicy crab meat, spicy touch of cheese.. what more do you need for a romantic dinner on a summer evening in the country))) the Salad turns out delicious and satisfying, but at the same time easy enough. I invite you to try))
More recipes