One of the most delicious appetizers from Turkish cuisine. Delicious, fragrant and spicy eggplant.

Ingredients for Appetizer of eggplant

Step by step instruction of cooking Appetizer of eggplant Our products for cooking. Eggplant cut along the length in half and then halves cut another quarter. Add salt and leave for 15 minutes Then squeeze out the liquid. 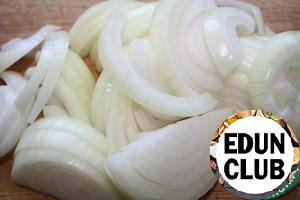 Onion cut into half rings. 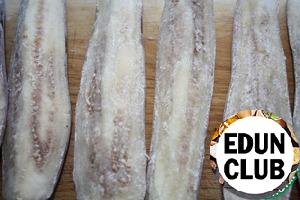 Flour mixed with sugar and roll them in the flour the eggplant.
I poured the flour and sugar in a bag, and then put the aubergines and a good shake, everything will be covered with a uniform layer. 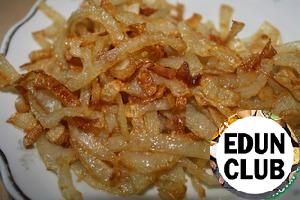 Pour oil in a pan and heated well. Fry the onion in oil, until Golden brown, for this mix to the onions 1-2 pinches of sugar.
Fried onions on a platter and allow to rest for a while. In the same oil fry the eggplant until Golden.
Fried slices of eggplant in a baking dish.
In this step, my camera did not want to photograph and I had to take an old, so the photo is a little different. Lemon juice mix with garlic, salt and pepper to taste. The eggplant onion and pour over the filling.
Bake in preheated oven about 10 minutes at the temperature of 200 deg. Need to eggplant along with the marinade warmed and soaked with odors. And here my camera deigned one photo))
Help yourself, Bon appetit! Shakshouka
119 4 - -
The name is interesting right? As the dish - this dish Jewish recipe brought my brother's wife. Tried - delicious, try it and you!!! Pseudo-Phala
109 - 10м 2
Pkhali - a popular dish of Georgian cuisine. In my recipe I suggest to replace only one ingredient to get almost the same taste, but fewer calories and less cost budget option. Besides that this dish is very tasty, it is also preparing the way I like it - simply and quickly!))) I have for any holiday feast, but all the hot dishes, there are clear menu: satsivi, pkhali and Olivier. But since I first gave guests the dish they are receiving the invitation are always asking: "Phala for losing weight?") Probably not because it's tasteless... Appetizer of herring, beets and potatoes
81 - - -
Hello, dear cooks! We have the window colder and colder, and the rain, light summer vegetable salads are gradually giving way to more substantial snacks. I want to share with you a recipe exactly like this. On a slice of fried potato - herring with onion and top with a sweet creamy nice beet, huh, very tasty! Appetizer decorate the table during the week days and in holiday! Help yourself! Beans in a pot of prunes
92 - 80м -
Appetizer of prunes, stuffed with beans with walnuts and garlic, has a sweet taste and creamy texture. Snack rich in vitamins, macro-minerals and vegetable protein, so necessary to man. Well-loved for Lenten table. Appetizer of tomatoes with cheese
78 4 - -
Offer the option of quick and delicious snacks.

Lean yum-Namiki
196 - 20м -
Reading about what you can do with normal dryers, I was inspired and made your Lenten option! it turned out amazing))) Appetizer "Senor Tomato"
88 - 25м 7
Tomatoes we all love! And they love people! Of course, everyone knows.. how much use he eats..! Our red tomatoes are rich in vitamins! A lot of the dishes because some are not in vain! Salads, appetizers, and soups go in the boot..! For good reason, all "Seniors" are called tomatoes! The importance some have..!, it always red..! Here I want to offer you.., tomatoes.. to make friends! pepper, garlic, and grass! in the amazing dressing! So a good snack! At once leaves the table..! But praise.. I will not give a prescription just to a dish..! Do you friends understand! That "Señor" we have to honor!! Appetizer chicken "Squash rolls"
127 - 30м 4
Absolutely simple snack from the "Guests at the door", but is present in almost every meal. Quick, tasty, and bright. I recommend to take note. Try?
More recipes