Very tasty and soft cheese soup. And tenderness the soup gives the squash. If You like cheese and soup, you should definitely try! First boil the broth with the Bay leaf, do not forget about the salt. I had a very small fillets so I added 4 pieces. Get ready fillet, cool and slice. Potatoes cut into arbitrarily and cook in broth for 15 minutes. A mixture of butter and sunflower oil stew the chopped onion until transparent. Add the vegetables into the broth, to the almost ready potatoes, and cook for 5 minutes. Our cheeses. Hard cheese and mozzarella to grate on a grater. Melted cheese is better to take in the jar. 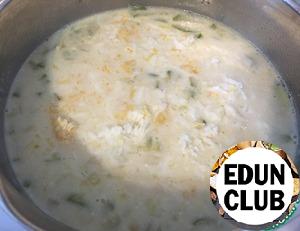 Remove the soup and using a blender, make puree. Add milk. The amount of milk depends on Your desire, what is the consistency like soup. After cooling the soup thickens some more, this should be considered when adding milk. Add fillets and nutmeg, and put it on the stove. The soup brought to a boil, stirring constantly so cheese does not burn. The soup is ready. Nuance fillet. My baby loves to chew the meat and I added it before chopping. Because soup "French" will serve with croutons))) I Have homemade bread. I fry the diced bread in a frying pan with olive oil. You can dry in the oven. Pumpkin soup
470 - 30м 4
Hello dear cooks. On this site I for a long time. But your personal recipes as it is not meant to spread. But for the past two years as I live in Spain, in the part called the Basque Country. And I became interested in her kitchen because my husband is Hispanic, and baskovskijj people are hard to convince that in the world there are other equally delicious "food". As I know, most of the Spanish restaurants with three Michelin stars located in the Basque Country. And San Sebastian is a city with a record number "Michelin" stars per square meter in the world! But I'm not going to acquaint you with molecular gastronomy. Because at home, it is almost impossible to reproduce, we, mere home cooks. But what is different baskovskijj normal cuisine is simplicity, naturalness and usefulness. So, let's begin. Pumpkin soup with lentils
105 - 30м 8
Easy to prepare soup with an unusual taste. If You love the taste of pumpkin, this soup will be popular in Your home. The red lentil soup
215 - 120м 6
The recipe I made up myself by combining a few soups together, but it turned out SOOO delicious!! Soup-puree of broccoli and corn
121 - 40м 6
In fact, Brassica oleracea - this is broccoli, but the soup are sweet corn and crunchy fresh pepper! Dieting absolutely delicious and easy, in General, what you need! Soup-mashed sweet potatoes with rosemary
107 - - 2
Gentle, wholesome, nutritious, colourful and delicious soup with its winning combination of sweet and salty in taste, slightly tangy and spicy with a hint of rosemary. In this embodiment, the vegetable soup, but if you want you can substitute water for chicken or beef broth. Pumpkin soup-puree with cream
103 - 30м 1
Surprisingly delicate soup with creamy taste will not leave indifferent even those who do not like pumpkin!
More recipes