Very simple spring soup (someone can be called a soup, but we are accustomed – "the soup"), green also called. And just something simply need to have a piece of beef, a little young nettles and sorrel. And, of course, water. And the egg and sour cream (but I prefer to mayonnaise) – this is addition, nice, but ... addition. 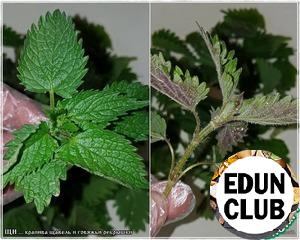 Nettle, there you see, what..., green on top, and the bottom is pink-purple. Still young. Maybe sort of like that. Who knows. But still cut, maybe not poison. Poured cold well water. What? Once there is a well, the water must be used. Moreover, it is delicious. The pot put first on a high heat. Minutes later, as there started. And the scale formed, where without it. Delete it mercilessly, of course. 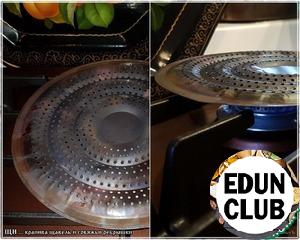 And then.... I do not cook the broth. I prefer it to simmer. Very helpful here is a divider. Otherwise, as fire is not reduced, and our gas – he is the hottest, probably, heats strongly and boiling still occurs. So, I highly recommend, if someone also decides the broth to simmer. 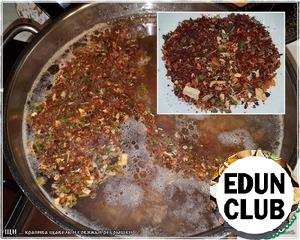 Here is a mixture of root vegetables for the broth. Everything is there. And parsnip, and red, and condiments, and even Bay leaf. For three quarts of broth, I take two heaped tablespoons. Is enough. It turns out fragrant and delicious. Cover the pot covered and let me ... hour and a half the broth with the taste of gaining. Loans green component. Nettle and sorrel need to sort out, to remove any excess grass. From nettles in the soup will be only the leaves, stalks to anything. And sorrel get all thick and coarse, called petioles.
A spoonful and a half of salt in sorrel and nettles Naseem. Bays water, stir. Let stand half an hour, so if it is there, fauna svehla and sand too, by the way soak stuck. And still then rinse under running water is necessary. And chop it. Much small is not necessary, but to choose the size so that the spoon is conveniently gone. Kartashkov about five or six to peel and slice. Again, the size of the pieces to choose such that it was convenient and a spoon to take is.
In the pan it. But! No sooner than an hour and a half after the pot put on the fire. And making sure that the potatoes are ready, the greens put in a pan. Soup homemade with beef
234 - 120м -
For those who like to prepare homemade soup and borscht, offer a recipe of cooking this dish. Every family kept the secret of cooking soup. In my opinion, the recipe is quite traditional. The main focus is pickled or fresh cabbage. I always cook soup on meat broth. Meat soup is better to take with the bone, the broth will be more rich and delicious. Some merge the first broth, I never do, because I believe that scent and taste are lost. So, prepare homemade soup.... Italian sour soup
208 - 45м 6
Yes, it happens... the Dish is called "Soup of sauerkraut Alto Adige". In the North of Italy, at the top of the Italian "boot", located Autonomous region of Trentino-Alto-Adige. It is the youngest region of Italy and most Italian of all regions. Currently, Trentino-Alto Adige is the famous center of Alpine skiing and the world Alpine centre. From ancient times to the present, this region is inhabited by germanophobia community, which under the influence of italianization slightly softened his temper, adapted to Italian cuisine, but still remained faithful to its culinary traditions. The soup really delicious, thick, hearty, with magic, some "Kostromin" spirit. Not to say that it is an Italian soup, any guest finds that eating an unusual Russian winter soup. Everything is prepared simply, but not quite usual. Meet! The soup is simple and delicious
188 - 60м 6
Each family probably own recipe of soup. I want to share a simple recipe that is enjoyed for several years. Soup
0.6k 3.8 - -
One of the most famous Russian dishes - soup. It is believed that this dish was known in Russia long before her baptism. At first it was a simple soup and cabbage was not a required component. Then the soup became known as only cabbage soup. In Russia every housewife knew how to cook this dish, but the quality of the soup it was possible to determine its thriftiness. "Not the kind of hostess that spoke beautifully, and is that a good soup is cooking". Tastes changed, and people's love for the soup remained for centuries. Offer its own version of cooking. Soup "Slavonic"
409 - - -
And here I must confess: I fell in love with this soup! This is something incredible! He is so bright, rich, powerful... Just the bomb! The recipe is not simple, have to Tinker, but the result is simply superb! Before such a soup was cooked in the Russian oven, but... as they say, for want of a stamp, write a simple and... Oven and ceramic pot to help us! Fish soup with anchovies and beans
242 - - -
Soup is one of the most popular first course. Today I want to offer not the usual soup, this recipe differs from the classic, but turn out equally delicious. Recipe found on the Internet, the author unfortunately I do not know, but thank you for the wonderful soup, and the recipe for "faked" for themselves.
More recipes