Burlatsky share – heavy. This work is akin to a spring Affairs in the country - plowing, digging earth, planting.. In both cases you need good nutritious food. Our boatmen have developed to a certain menu. Basically it's the first meal – soup or soup. And the second – porridge. For the shipowner, who accompanied his load of merchant porridge cooked separately. Rump covered in a canvas bag and boiled in a pot of soup. The porridge was rich in meat broth. Meat eating was definitely present. Try to pull multi-ton ship on an empty stomach. But by the end of the day all calories are spent on the burlatskii strap. Let's fantasize, what could be burlatskii, for example, shurpa. Cook was appointed the youngest of the boatman, it was his additional load during night stops, when there was a fair wind and with a tail went sailing by day and by night. At this time cooked on Board. Do a wooden box filled with earth or sand, and the campfire. Interested in what's cooking on ships overseas Oriental merchants, probably tried to cook their dishes, for example soup. Only adjusting the recipe to suit your needs. Overseas tomatoes and peppers is not for the man. Only local vegetables, spring greens that in abundance grew near the tow path – a young nettle and sorrel. In each cottage there is a corner where grew nettles. Pick the beam (in gloves!) wash in warm water with sorrel. After the water the nettles will no longer streetsa. 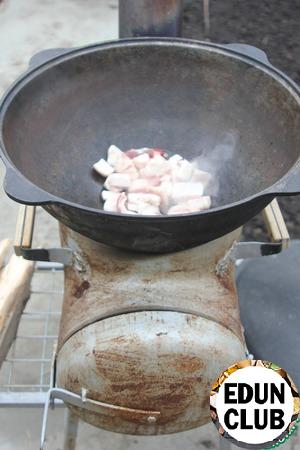 Heated cauldron, lay out fat and vytaplivaete it. Rinds are thrown back.

In hot fat spread the ribs and cut with boneless pork ribs. Fry until "solar" shade. Salt, add spices. Where did the boatmen spices? Yes helped to refloat the ship overseas merchant - that he had to pour a bunch of goods for the fair. After all, the stranded ship is quite a catch for the river bandits-pirates.

Put potatoes and cover everything with hot water to cover 2 fingers. Close the lid and cook for an hour stirring occasionally. Lay the bags of wheat, 10 minutes later the bags with buckwheat. Cooking times are different. Grains can take any, we chose native Russian, because the Russian haulers. Cooking time increase 1.5 - 2 times from those listed on the box, because we cook in pure water and in a rich thick broth. Groats will absorb water, keep a kettle with hot water. Pour that the packets were completely covered with water. In the end, they should swell as the pads. 10 minutes before the end of the laying cut leaves of nettle and sorrel. This stuff on the flood plains near the river fully grown. Yes and vitamins. Ramie gives the consistency of the soup some creaminess.

Want to brag about our hearth for the cauldron. We call it Stone. Remove the cauldron from heat, allow to infuse for 10 minutes. Take out the bags with the cereals, it is easy to do with a fork for the loops. Krupa turns thick, impregnated with meat flavor of the soup. It can be eaten along with the soup, you can postpone. I like to put into the soup a handful of millet and a handful of buckwheat, and spoon to mix to taste.
Thoroughly refreshed to the strap, excuse the furrow.
a good all season and good harvests! Mushroom soup
269 - 60м 4
Yesterday opened the season with a quiet hunt, and very successfully opened! White, boletus and aspen. The rain pours down for 3 weeks, so that the mushrooms can be cut! And I decided in connection with such a beauty to cook a mushroom soup, which prepares my grandmother. Its originality lies in the fact that you use tomatoes for a filling soup. Taste is bright, unhackneyed, very rich. Original spices give a unique flavor that enhances the flavor of mushrooms. Try it! Soup "Agamat"
308 - - -
Enkamat is a traditional Swedish vegetable soup with ranch cream and the yolks. Translated from Swedish ängamat means "food from the fields." This vegetable soup last time, alas, has lost its popularity and prepare it all less and less. And, sorry, the soup is very tasty and deserves the most careful attention and every respect. Soup with dumplings
294 - 120м 4
I hope that you will appreciate this recipe. And soup with dumplings cooked in our recipe will be the perfect hearty dinner for your family. The trick to soup dumplings is that you can eat it without bread. After all, the bread product in the form of dumplings is already present in the soup. Although dumpling soup is also delicious and with a slice of bread. Dumplings are usually added to soup or served to him. Brnze soup
259 - 80м 4
Dish with an unusual name Brnze soup is a rice soup with meat, fried onions, seasoned with a mixture of eggs and broth. Very tasty and flavorful soup!!!
More recipes