The wings "Bon Bon" in a sweet and sour marinade Variations of this dish on the Internet a lot. Exactly whose recipe I used. Very tasty, juicy. This dish can be served not only for everyday and for festive. Highly recommended! 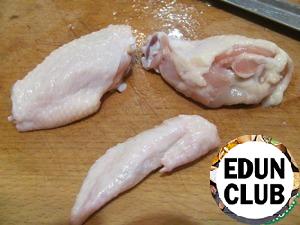 Chicken wings wash, if necessary, to remove the remaining feathers.
At the joints into three parts. Use will be two parts, and the brush of the wing we need it. 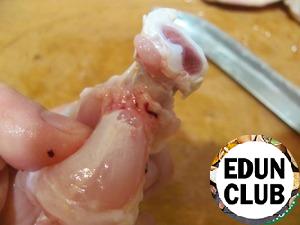 Taking part of the wing, which was closer to the torso. On the narrow side cut tendon. Drop the meat on the bone, Stripping knife, until the second edge of the bone. The second edge must be guessed, but not to be exposed. Wrenched the meat so that the skin was inside and we had a ball. 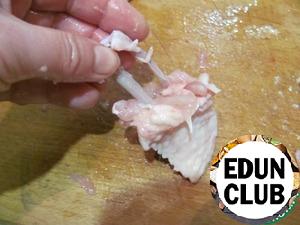 The same make with the second part of the wing. But in this part there are two bones. Sections of these bones together. 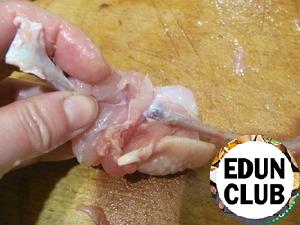 All products, except for the wings, put in a bowl. Mix and try. Add if to your taste something is missing. Dip each wing into the marinade. Put in a bowl, it is desirable that the bones were not in the marinade. Pour the leftover marinade. Cover and leave to marinate for 4 hours. I are usually night. The form for baking cover baking paper. Take out the wings from the marinade and put in the form. Bake in preheated to 180 degree oven for 40-45 minutes. Below the wings are not very hot, in the middle of the process cover with foil.
Serve with your favourite side dish or salad. And you can eat and just nothing. Chicken with pineapple
89 4 - -
Tender and slightly sweet chicken that will grace any table. Chicken skewers with pineapple
95 - - -
Delicious and tender kebabs offer You. Is juicy and flavorful. Happy to eat children and adults. And most importantly, fast and affordable.
More recipes