Real Royal ear by an old recipe. Has a distinctive aroma and taste. This recipe used to prepare soup for the Russian tsars. Found it on one of the sites was a photo of the recipe from the cookbook of 1896. All recommend this recipe. Thus it is not difficult to prepare. Fish be sure to use only a river. While catfish and bream will not work. In Russia, for this ear was served pancakes with red caviar or fish.

Ingredients for The Royal ear

Step by step instruction of cooking The Royal ear Pervy broth.
Take any small fish (carp, perch, Rudd). Gutting it, remove the gills and wash the fish. Place the fish in cheesecloth and cook for 1 hour. After cooking the fish throw away. 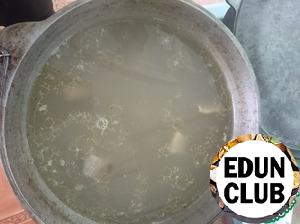 Take the fish out of the broth. Clean the fish from skin and bones. Mash with a fork the fish into mush, which we then put at the end of cooking the soup (see the penultimate step). The third broth.
Take the fish for a third of the soup (sturgeon, sterlet, Beluga). Disemboweled it, cut off the head, and the head is thrown, wash. Definitely need to pull the chord. To do this, cut the spine from the belly across the length and pulls the chord. Cut into serving pieces of 3 to 5 cm, approximately. One portion of soup put two or three pieces of fish. Peel the potato and cut it into small cubes. Lay the fish and potatoes, add salt to taste. Cook until the potatoes are done, about 30 minutes. Cover with a lid and infuse for 10 minutes. Ear ready. When serving, fill with finely chopped parsley. In Russia, for this ear was served pancakes with red caviar or fish. Fish soup in Kazakhstan
188 - 150м 8
Fishing in Kazakhstan "scoring"! Not fishing, and work. But, as you know, it's important to eat well. I went to cook, so while the guys are working, my task them tasty and satisfying feed. The photo of the ear unassumingly, "lazy" but I want to offer a historically proven recipe. At home - simple. Sea soup. Double fish. Seafood soup. Double fish
84 - 60м 3
Love fish soups, any. They always attract me and constantly want more more flavor, more fish and that's what I want to offer you, two fish, two taste - boiled and baked fish, and all at once! Enjoy and nothing does not deny! Soup from canned mackerel
158 4 30м 3
Cheap, quickly prepared and almost like an ear. Kalia fish
100 4.5 90м 4
I would like to share unjustifiably forgotten recipe fish cagli. It is quite a thick fish soup with a sour base. In Russian cuisine was considered a festive dish. Soup Fisheye
163 - 50м -
This soup can cook everything, but I add cheese.
More recipes