Rather, it is not even a recipe, and cooking method. Now the summer holidays, and what to do if you went away for a few days "savages" and you run out of bread? Properly, use the products that are out there with you and have a "shompolnye" bread! And children who don't know what to do outdoors, you can bring to the process. Shompolnye bread was invented by the soldiers of any war (even the ubiquitous Internet did not answer me what I have always believed that the civil war between North and South) - when it was hungry, but there was flour, water and the desire to eat. Then mix a simple dough, wound on a spit and baked over charcoal.
Everything is very plain. Products the most common, the dough a little shortened in connection with a camp-field conditions. Products, of course, took "by eye".
So, warm water, sugar and yeast first go to a bowl. Allow the yeast to disperse just a couple of minutes. 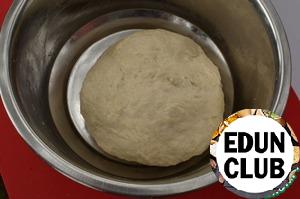 Roll bun, slightly greased with sunflower oil, cover with film and leave to approach the sun. Or, if the day is cloudy on the stones of the hearth. The dough rasslaivetsa 30-40 minutes or until "enough already, the coals are ready!" :) Then take a skewer or a suitable stick (it was originally a pine stick with a knot on the end to remove the pot from the heat, I had sanded, so that the crust does not fall into the pot, and then the idea came with the bread). In front of the fire spun from a test harness (the harness is shorter and thinner, the quicker to cook) and wrapped our makeshift "ramrod". No grease needed, the bread is removed perfectly. And bake over coals for 30-45 minutes, periodically turning. Give a little to cool to be able to take a hand, and, turning, gently remove with a stick. One bread, that will never be rented, so it took a bit of resinous pine aroma. The bread remains soft and on the second day.
And, of course, the options can be a little sprinkle with cinnamon (sugar is not advised - it will burn), your favorite spices, coriander, cumin... We just ate braised in wine with bacon. And "dessert" - tea shompolnye bread and condensed milk :)
A good rest and Bon appetit! :) Loaf oatmeal-mustard
97 - - -
Delicious and healthy, soft, fluffy, airy and so sweet oatmeal bread. Very reminiscent of a muffin in taste. Long enough does not lose its qualities. And is prepared quite simply - is absolutely not problematic recipe. Come on in, help yourself. Milk custard bread
86 - - -
Girls, as promised, take off your pilot bread. Did this first time and here's what happened... Baguette with fried onion "Debut"
80 4 - -
This is my first baguette, now I scold myself why not make them early, this is good. I just love the thin and crispy crust on the cakes, and since that is the case, and inside the fragrant, delicate crumb with large holes, all so fluffy and delicious. Oat flour adds a little density to the flavor, but not the dough, the aroma of fried onions is very harmoniously blended, not Intrusive, and pleasant to the taste. Not taken up baguettes, thought it was too long and boring for me, but in vain, if you know in advance what it is and how to set, time flies, I highly recommend to try. Unleavened bread in the bread maker
93 - 62м 2
My recipe will take you a minimum of time, as knead for 2 minutes, then bread it bakes one hour, and tasty bread on your table! Grey bread
111 - 150м 12
I love bread, especially if it is your home. This recipe of brown bread with whole wheat flour taken from the book the Richard Bertin "Your bread." This bread warms and delights on a cold winter day. But the form of rolls for convenient use and storage, for example, freezing. Roll "Cherkizovsky"
90 - - -
Found this recipe on the Internet. Chef Ian it was represented as the recipe of course, and she baked a loaf in a slow cooker (which I have yet). Soul wanted variety, so I did. What can I say? I liked this loaf, but I baked it in the bread maker. My changes relate to the replacement of margarine for butter. Yana thank you very much! Very tasty.
More recipes