Amaranth seeds pleasantly crackled, and the banana flavor made my morning memorable! Once in the store I caught the eye of amaranth, so I decided to try it. For the first time has not caused any emotions, then I guess I didn't really have a taste. But now I love it. I think the combination of pumpkin and banana flavor of these "seed of the Incas" can be a great to Supplement. But the benefits of this cereal once again and can not speak. So I invite you to look :). 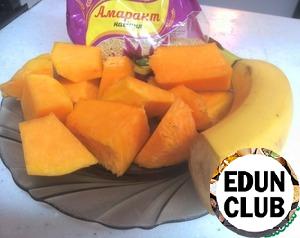 So, here are the main ingredients for our cereals. Pumpkins can take more or less. I like pumpkin porridge pumpkins were many :)).

Pumpkin clean and cut into arbitrary pieces, put them into a saucepan, pour a little water and then boil it.
Package amaranth has been said before cooking, soak the seeds for 3 hours, but I just washed and filled with boiling water. When the pumpkin becomes softer (after 5-7 minutes) in a saucepan, crush with a pestle. With soaked amaranth seeds to drain the water and cover them in a saucepan with pumpkin. Pour water, mix and again bring to boil. Cook over low heat for about 20 minutes.
Towards the end of cooking you can add in the porridge of your favorite spices to the pumpkin. I love the combination of pumpkin and cinnamon. After the porridge is cooked, turn off the heat. Peel banana, put in a pan with porridge and also mash with a potato masher. Of course, you can kill it in the blender, but I love to feel the pieces. Also at this stage I added the raisins. Quinoa with dried fruit and nuts
102 - 30м -
Not so long ago discovered Quinoa. Really like his taste with a nut note. I propose to please yourself and loved ones while fasting, useful of porridge - dessert, which can be a full Breakfast or dinner. It is very tasty! Go - treat! Breakfast in a jar "Very pious morning"
89 - 5м 1
I'm a fan that's just such a convenient and tasty Breakfast. Nothing cooked, not fried. It quickly, in advance and very helpful! Millet casserole on yogurt with berries
98 - - -
Useful zapekanka. Hot full Breakfast or dinner. And once out of the fridge it can be served as a good dessert. Today I made it with cherries Manno-pear porridge
105 - 20м 2
Recently watched edition of the program "Control purchase". From there, and found out this interesting recipe of semolina! I hasten to share with you! Everything is prepared immediately ate! ))) Soooooooooooooo well! Semolina "Come on, honey, hurry"
111 - 10м 2
We offer to Your attention semolina with sour cream to which we added orange and mint touch. Buckwheat porridge with pumpkin and honey
121 - 30м 2
This buckwheat porridge is cooked in milk. It doesn't use quite sugar as a sweetener - honey. Once this (or something like this) porridge fed my little boy in the ' 90s. Let's just say, this recipe is a memory. As a measure of volume used multistage Oatmeal "Just oatmeal"
99 - - -
"Maaaan, well, can I still eat oatmeal caaaause?" "you two plates eat in the morning!" Witness that sort of dialogue I was recently in a beauty salon. Talked among themselves my master Irina and her little daughter, the lady is very capricious, and for food especially. The question arose immediately, what kind of magic such a mess, Ira said,"No magic, just oatmeal..." Krupenik "the Union of buckwheat and cottage cheese"
119 - 60м 6
Hello again! Today I come to you here with such a wonderful krupenik.! Ah, a little behind :)) On the competition already submitted the recipe buckwheat-cheese krupenik. Well, nothing, I have the recipe of his own composition-improvisation :I) So krupenik it turns out the other ;) Try this option, hope you enjoy!
More recipes