Tea made from pine needles and rose hips In these winter days can be prepared vitamin tea of pine needles and dried rose hips! The drink is light, useful and with an interesting taste! For the first brewing it is advisable to take a smaller number of needles, not to get too resinous taste!

Ingredients for Tea made from pine needles and rose hips 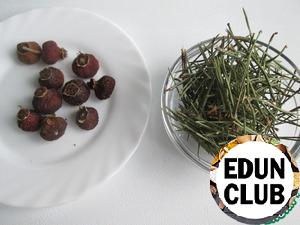 Pine needles collected from young branches, at home it must be rinsed with water.
You can brew fresh from the needles, and the remainder dry. This tea is prepared from dried pine needles.

Take a handful of dried pine needles, approximately 5 g,
and 10 pieces of dried rose hips.
Optionally, the number of hips can be increased, this will enhance the taste and make it more saturated the color of the drink. Dried pine needles a little grind with a knife. For first cooking, it is advisable to take 1 tablespoon of pine needles, to the finished tea to adjust the pine taste.

Fresh pine needles can crush that there was a strong pine taste. Take her in the amount of 0.7-1 tbsp

Making tea the classic way:
rinse the thermos with boiling water, place the rose hips, pine needles and pour 1 liter of boiling water.
Optionally, add the peel of Mandarin. Nothing to add, will also be good. Close the lid and allow to infuse for 3-4 hours. Before use, strain through a sieve.
Vitamin tea is ready! For a quick tea boil only pine needles. Not to get overly resinous taste of the drink, fresh pine needles, you can not grind.
For the first time in the teapot placed 0.7 tbsp of pine needles (in the future, you can 1 tbsp or to taste) and add 0.5 liters of boiling water. Allow to infuse for 30 minutes. 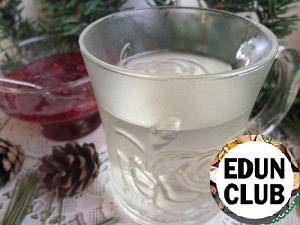 Then strain through a sieve, and you can try! The drink appears pine taste, but the color of the water is almost unchanged! Ginger tea for immunity
93 - 30м 4
The secrets of my ginger tea, thanks to the use of which, our family does not know what "hurt"! Tea in the village "Autumn evening"
102 - 20м 2
This tea recipe was inspired by the cold autumn evening, after a hot bath). This is the time of year when after parilochki want a cold drink that is hot fragrant tea! The tea came out very even not bad - all the flavors are woven into a single song, and mint absolutely does not interrupt the other flavors), - help yourself! Kuurma Choy
181 - 30м -
Hi all. Here and autumn came with its not always pleasant weather surprises. And that would warm up when walking for mushrooms, or after a hard working day we will drink tea. I think a lot will disagree with me )), but it is their right. To drink we will not a simple tea, and tea of the nomads kuorma-Choi. This recipe is from my favorite Kyrgyz dishes. For the European man can be not very usual combination of products, but I think tea must like you. Everything is simple and elementary Koporye tea
140 - - -
I want to share the recipe for the "Russian tea", which is much tastier and healthier than Indian or Chinese, but the caffeine content in it is much less than usual! Another distinctive feature of this tea - cups clean and white teeth!!!

Ginger tea
125 4 5м 4
It is difficult to find something more useful in the winter from the cold, from all kinds of cough, and just to set the mood. If you train yourself to drink in the morning on an empty stomach, no g..... s not! Grog-alcoholic
87 - 15м 2
Non-alcoholic grog can enjoy both children and adults who do not drink alcoholic beverages. Black tea will give a rich color and the drink is tart, with woody notes. Cherry Chai
55 - - -
This delicious warming drink is perfect for cold time of the year! Masala tea
271 - 15м 2
... or divine bouquet in a Cup. It's hard to describe in words what is to that extent unusual, awesome and amazing. Words can only describe the taste in comparison, but to compare the divine, absolutely stunning flavor and aroma? Again once again and probably be right - the recipes of Vedic cooking, not to describe the need to prepare and enjoy! Six months I posted here of their recipes, so I decided to get back to you with something truly stunning - masala tea which will give you unforgettable pleasure!
More recipes