Burbot soup, cooked this way, also called the hierarchical soup. I cook often, but with the same pleasure. This time the fish trivia I found just the brushes but put, following ancient recipes, mashed with onions burbot liver. It added flavor, so much so that the wife and mother-in-law never tired of praising. Burbot liver first settlers who came to Siberia from Central Russia, once called the way, later ingrained the name "max" (accent on the first syllable). The recipe specified the weight of burbot whole, but only the part that went in your ear, the burbot has been weighing 3.5 kg.

Ingredients for Soup of burbot

Step by step instruction of cooking Soup of burbot Carcass (set to stock) cover with cold water, bring to boil, remove the foam, add salt, add chilli, cook on low heat for 1.5 hours so that the chicken bones had completely vyvalilis to them went down all the meat. Ruffs put into a clean cheesecloth, tie, fasten cheesecloth over the pot so the entire fish trifle was in the broth. I used a metal skewer. Cook for another 40 minutes. You can do without the gauze, but then after cooking ruffs the broth be sure to strain. 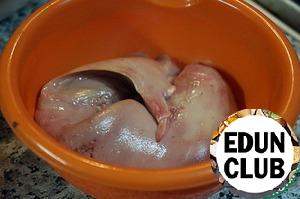 Carefully remove the liver. Carefully – because it is very easy to release the bile, and to do so in any case can not ruin all the dish. The liver to put aside. Burbot butcher to remove the fillets from the bones (it is best to do in the beginning to burbot bones to send to other fish skeletons), cut into small pieces. 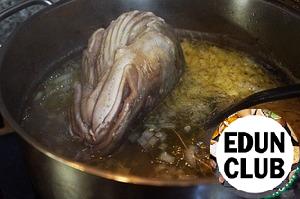 Remove ruffe from broth, throw out or give away dogs. Strain the broth, again bring to a boil. Send the broth, onion, Bay leaf (you can then remove for 5 minutes until cooked soup, but you can not do this), both the head of the perch... 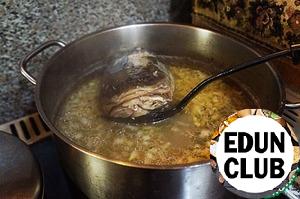 ...and burbot. Cook over medium heat for 10 minutes. To lower in soup fillet burbot, cook over medium heat for 15 minutes. When the fish is cooked, put it in the ear max. Stir, bring to boil and remove. When serving, you can decorate each plate with green onions and garnish is served separately boiled potatoes.
Bon appetit! An unusual fish soup
114 - - -
When the house is a lot of food – a celebration! But baking is bored and wants something opposite, spicy, salty, liquid. Soup with Chinese-Japanese style – the most it! These soups are designers, as I call them, I cook often. Any vegetables that are in the house, meat products, or over – fish the pieces after cooking the main course. Made patties of salmon with Pollock and baked fish pie. Left head-tail-bones, and the salmon was medium-sized. To the usual ear – only to get dirty, but in this soup –it is! The soup is strong and tasty. And with the addition of vegetables and spices -fragrant, spicy, spicy! The vegetables almost raw, vitamins high, miso paste is not heated and preserves all the nutrients, and even nori added. Solid benefits, and even anti-virus support the body! Cream soup "Sunny"
108 4 50м -
I tried to cook different Thai soups... :))) And here is the result of my experimentation. This variant became the most favorite in my family:))) Very gentle, soft, tasty and unique. Help yourself !!! Ear milk
83 3 - -
The basis of this soup was the soup of the Bulgarian cuisine, I added the potatoes and fried onion and carrot. Additionally, the original is also used tomato paste, I went without her. The unusual combination of milk and fish is pleasantly surprising, for me and my family liked ear. ))))