Delicious jam! My men liked it. The neighbor and her granddaughters, too. The jam is sweet, but felt a bit of plum sourness. 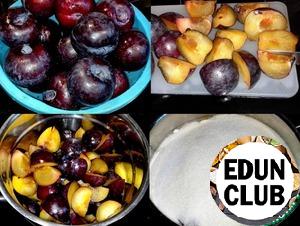 Clean plums cut in half and the halves still
times in half. Put them in a pot and poured
sugar. The plate included on a medium heat and stirring
plums until the sugar is dissolved. 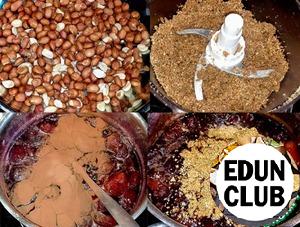 Peanuts poured in the pan and on low heat
roast the nuts until Golden state. Cleanse them
from the husk and shredded in the shredder. Jam
boiling, the temperature of the plate is reduced. Poured
in plums, cocoa and chopped peanuts. Cooked a short time after the start of boiling,
30 minutes. Put in a pan of bitter chocolate.
( Do not add ). The stove turned off
and hand blender shredded the jam in a uniform
mass right in the pot. Shifted hot jam
in banks with twisting lids. In the fridge it became even thicker.
Jam is cooked for a meal once, but not for the future.
For long-term storage of sugar you need to put
more. Jam strawberry
348 - - -
The beginning of summer and the beginning of preparations for the winter. And opens this season, of course, strawberries! The benefit of this stuff we have in the country enough – a whole plantation of fragrant sweet strawberries! That's just sometimes the question arises – what to do with it? Of course, to eat from the belly, roll up the sea of fragrant compote, no doubt about it, but still. Jam, ironically, we are reluctant to eat, even strawberry, but strawberry jam is yummy! This jam is not original, and out of these products it a bit. But I like it for its simplicity. Maybe still useful to someone))) Pear jam with lemon
397 - - -
Allow me to offer the option of delicious jam from pears with lemon. Delicious, it is good as a separate dish, will enhance any dessert. Help yourself. Vitamins in winter - quince
0.8k 4 - -
I harvested in the fall growing in my cottage quince, it is considered to be decorative - it has a little fruit, but the taste and quality of fruit is not worse than the large southern fruit. Spicy jam made from gooseberries
385 - - -
Jam from gooseberry purple with aromas of cherry leaf, cinnamon and star anise. For peace tea parties with family and friends. Apple jam
328 4 - 3
Now just the holiday season) And we have a garden lots of apples, here is one of those options that you can do with them - delicious jam. For photos thanks scullion korztat. Jam black ash
391 - 60м -
Unreal delicious jam for those who like new, please try it, I guarantee.
More recipes