Decor. For those who have got free time and want to make some unusual cake, offer to do one of these two. Of course, they have to Tinker, but the result is stunning. These cakes seem to be different, but really the only difference is the color. This is a sponge cake with cream cream cheese and whipped cream. About mastic and oil of the flowers I will not write, that's all they know. But everyone who has tasted these cakes, the most concerned about the eyes and balls. Here about them, I write. 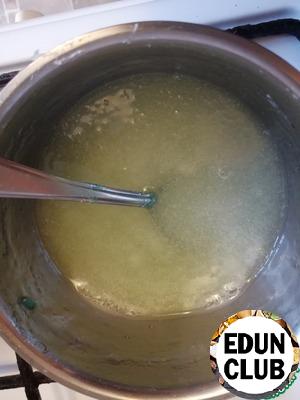 From agar-agar and boil syrup jelly. The proportions take as described on the packaging, the recipes for different batches are slightly different, so read Your. Only the amount of syrup you need to choose the lesser. For example, on my pack says - 1,5-2 cups of juice, then I take 1.5.
I make two servings of jelly with lemon syrup and the second with milk and any flavoring. Unfortunately, natural flavors are not too bright, you have to take chemistry in milk, I add coconut syrup purchase, it is colorless. Take 1 Cup of milk and 0.5 cups of syrup.
At least on my packet of agar-agar and it says that you have to pour liquid at room temperature, I have agar immediately collapses, so I continue to heat the mixture until just combined Those areas that are connected, can be crack on the junction, not terrible for eyes the crack, you can go with melted chocolate, will eyelid. For balls, it is possible to a form to pour a little jelly and put it in the bowl, the excess jelly is spilled, then it is easy to separate.

And that would not bother it is better to buy a silicone form for the balls.

The eye is attached to the cake on the toothpick.

Even for eyes I smash in the blender bit of slightly dried sponge of moss, sieved and rolled in the resulting powder the back side of the eye to create the appearance of the skin. Put the cups in the microwave, without pressing them to each other, to the maximum ( mine is 900) for 1 minute. Then give a few minutes to stand and cool down. Then with scissors cut the glass and take out a biscuit. It is better to make the day before decorating, that would be dried up. Then it is easy to pinch off, or grind. This moss can be used if the desired effect of velour (and make it spray, which I do not). Moss you need to grind in a blender and sift. And then applied to the aligned cream, cover with plastic wrap and press with hands. I did a frogs head 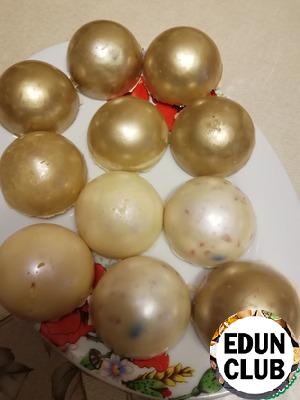 The bottom of the silicone mold with a brush cover conturina. Pour some chocolate and spread it on the form. Then send in the refrigerator. Form, the chocolate is easily removed To glue the halves of the ball, you need to put the plate on a saucepan with boiling water. When the plate heats up, attach the chocolate halves. The edge will melt and equalized. Until the chocolate is frozen, press the two halves get the ball. 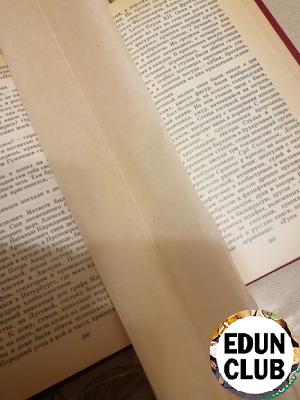 Well, the last element of the decor - chocolate arrow, or any direct, narrow element made of chocolate

If I just put a line of chocolate, then I have first, it always! turns rough, the second is blurry and the third breaks easily. So I decided to make these stripes form - just turned four times a piece of baking paper to form a rigid sheet. Then the sheet is bent and pressed along the fold. Shame, but put it in a book. Otherwise held. And in this fold, it squeezed out the chocolate. Toothpick has issued a sharp tip and put in a half-open the form in the refrigerator (without the book). Once the chocolate has cooled, take the arrow out, put the flat side on a flat parchment and added a tail. The arrow was very strong and smooth. Cake with pudding "Tangerine doping"
209 - - -
This is a great cake for the holiday table. After the New year without mandarins arrives! Cake "Fantasy"
61 - 40м 6
When I was in school, my friend for every birthday mom made a Turtle cake, it was their signature dish. I remember the taste and wanted something new, but with the same tortillas (the dough is soft, airy). And here's what happened... Currant cake with "hrustenko"
256 - - -
Melting in your mouth cake with soft sponge cake, soufflés from Cassis and the unexpected "perustuvaa" a layer of toffee and puffed rice adds a special flavor sweet sour dessert. You should try it! Cake-manna "On the threshold of summer"
92 - 60м 8
Why do we from manna, which we all know and love from childhood, not to make a cake?! A real, delicious cake! And with the popular in Soviet times, sour cream and berries! Because the threshold is berry time, so, you can pamper yourself and loved ones in a cake - very often! Cake "Anniversary godfather"
97 - 240м 30
Kuma asked Kumu bake the cake for 30 years, that's what happened, a biscuit taken from the recipes on the website, and soaked curd - yogurt cream. Cake "Malakoff"
84 - 120м 12
Cake "Paris". The recipe for this cake, known no less "Napoleon" and "Sacher" invented by French pastry chefs. Isn't that the title betrays something in Russian familiar? This cake was dedicated to the French General Jean Pelissier, to whom Napoleon bestowed the title of Duke von Malakhov for the capture of Malakhov hill near Sevastopol. An extraordinary story, however, does not prevent the dessert to conquer the hearts of foodies around the world. Pound cake "Squiggle"
152 - - -
Experienced cooks will find it simple and mundane, but to someone, he may be useful. Delicious, easy to prepare, requires no special culinary skills. Black cake "Yan Tao"
244 - 50м 8
This cake I tried from my friend when I was visiting her. She told me an interesting story about the recipe for this simple and at the same time very extravagant dessert!
More recipes